Ahhhh…Finally back in the mountains again. The season kicked off with a warm-up hike on Square Top Mountain, located right across the street (Guenella Pass Rd) from Mt. Bierstadt. I climbed this mountain last year and found the hike so engaging with interesting geology and incredible views that we saw to it to use it for the season kick-off this year.

Unfortunately the hike was somewhat different than expected. We expected that the weather, which was forecast to be 50% chance of rain after noon, to be less than optimal. But heck, I will hike in any weather as long as it is not torrential rain and/or lightning.

We arrived at the pass at around 9:30 in the evening. A little later than we wanted. We used headlamps and my Ford Escape’s headlights to set up camp as it began to drizzle. 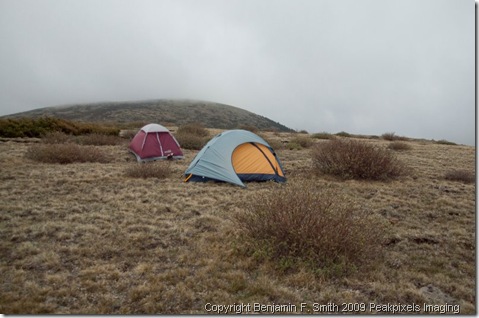 We had everything set up and were in our respective sleeping bags by 10:00ish. We decided on a pretty early start of 6AM so that we could be up and back by noon to beat any rain or thunderstorms.

We ended up leaving camp around 6:15AM in very thick fog and cold temps. We headed up the trail past the toilets. We started down the standard trail for about 10 minutes then broke away and headed North (right) toward the long ridge leading to the summit 2,500 feet above. 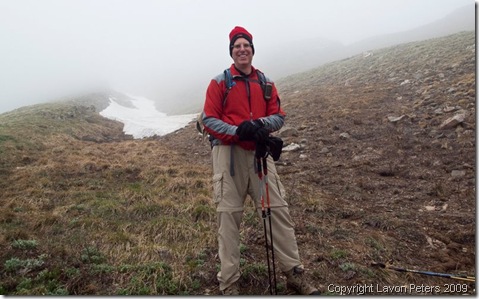 The Author at the Lower end of the Trough

We were essentially in the clouds at this point. Think, dense, wet sloppy clouds. The ceilings were very low (to the ground) and we were navigating from my memory and by GPS. This was going to be an Instrument Approach to the summit in IMC (Instrument Meteorological Conditions).

The first waypoint, or feature, we were looking for was a prominent, in good weather, trough leading up to the top of the ridge. You do not have to go up the trough but it is an interesting feature to climb. We found the lower portion of the trough using the GPS. 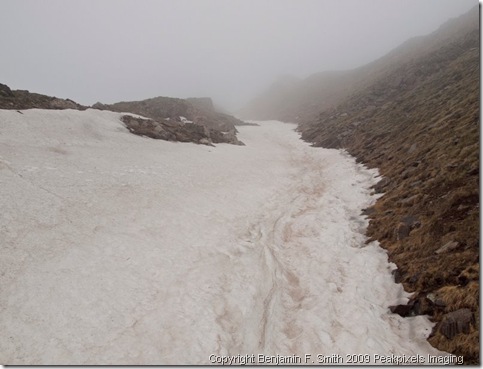 A good Look up the Snow Filled and Foggy Trough

I started leading up the trough looking for the good snow that would support me. I was usually able to find good snow but I did punch through in some sections.

Post-holing to my knees. This was Actually Fun (sort of)! 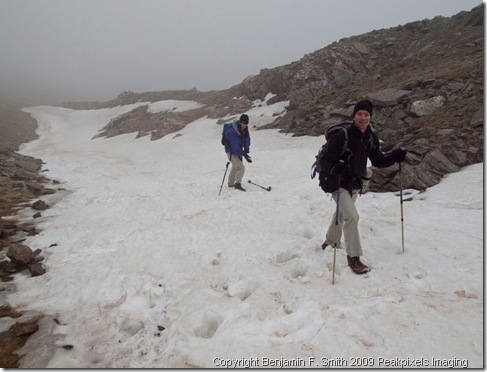 Don and Lavon Slogging up the Trough near the Top

The team topped out of the trough and began to make our way along the long and gentle shoulder of Square Top. The fog was so thick along here and all the way to the top that at times it was literally hard to see 20 feet. To make conditions even more enjoyable the wind kicked up along the ridge as well. I estimate that the wind speeds were constant at 15 to 30 mph with some gusts a bit higher. Temperatures were in the mid 30s. So while it was not freezing; it was a very very damp and windy cold that made the hike sort of miserable. But it was the miserable that one looks back on after the hike and knows they accomplished something a bit more impressive than a simple walk to the summit.

After a long cold and windy walk across the ridge we finally came to the final pitch of the climb. This final portion consisted of about 700 vertical feet of relatively easy rock scrambling. Of course today the rocks were wet and the route was completely obscured by fog.

But with my memory of the previous assent and the GPS track, we were able to negotiate the the rocks. 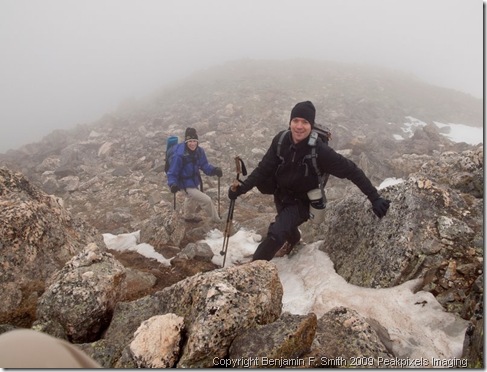 Don and Lavon, Smiling, in Simply Atrocious Foggy, Cold, and Damp Weather as we all Scramble up the Boulder Section at about 13,500ft 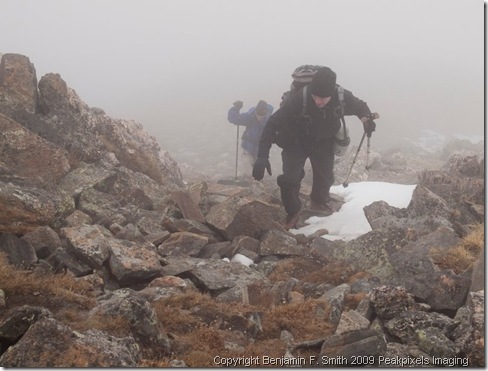 Are we There Yet? Near the top of the Scrambling Section

You can see in the picture above just how foggy it was at altitude. I was only about 10 feet at most from Don and the fog is readily apparent in this image. It was really thick. And oddly…very windy as well. We were, at times, able to avoid the wind as we skirted below the ridgeline. It was a pleasant, if not short, relief.

We finally topped out of the rocks only to find a solid snow field leading off into the formless gray mist. We sat down on some rocks and put on our gaiters. I led the group off into the snow, which was for the most part solid. I followed some old tracks of a previous hiker and found the footing generally good. I punched through in a few places.

As I looked up the slope I found that the snow and the cloud had merged into the same amorphous mass. There was absolutely NO visual reference. No horizon. No nothing. Just the indistinct grayness of the dimly lit snow and cloud and the muffled sounds of my climbing partners behind me.

We kept an eye out to the right of our path as there is a steep exposure capped by a cornice. We stayed about 15 to 20 feet from the edge.

We finally came out of the snow field after several minutes of tiring slogging. From this point it was a simple matter of picking our way through relatively flat rocky areas and small snow fields until the slope rounded over to the long level trudge to the actual summit. 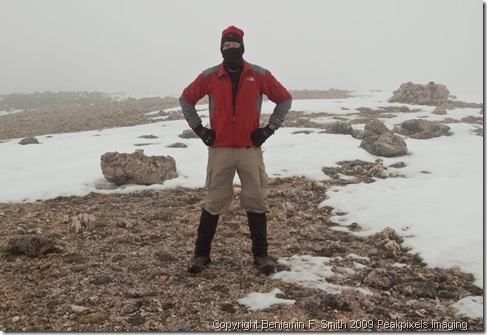 The Author on the Summit of Square Top

We walked the easy level portion using the GPS to ID the actual summit high point as it was not abundantly obvious in these conditions. Finally, ot the summit at around 9:45am, we took some quick pictures in the wind and cold and decided to descend. 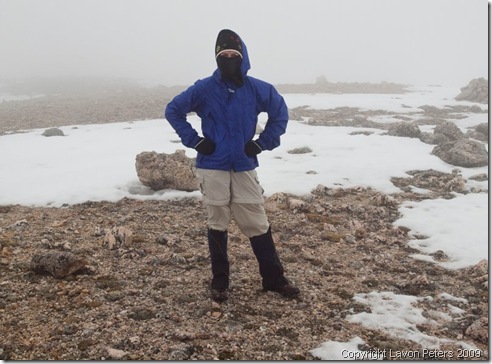 Lavon on the Summit. She is not as Mean as She Looks 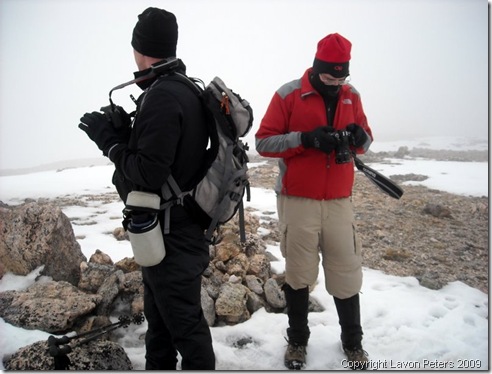 “Chimping” the Photos at the Summit. Expose to the Right

Originally we were gong to do a loop route and descend the “traditional” newer route. However, the newer route goes down the more southern flank nearer to the Square Top Lakes. But given the snow conditions I was not sure what we might find on the decent. I also considered that the trail out below the lakes could be really swampy with all the run off. So instead, we elected to do something known and returned by our ascent route.

The Trip Back Down. The Cloud Base Had Lifted a Few Hundred Feet

As we traveled back down the ridge, the cloud base had lifted a few hundred feet. This new found visibility lightened our moods and teased us with some ghostly views. We could see Square Top Lakes and some other features completely obscured earlier on our ascent.

The only change we made on the way down was staying higher up on the ridge and then diving down to the trail returning us to the main trail. We did not use the gully on the return. 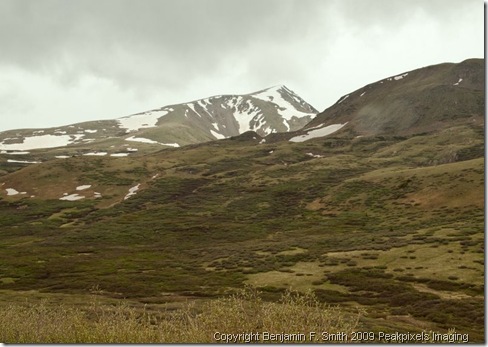 Square Top with the Vail Lifted

We finally returned to the parking lot at around 12ish. As we broke camp it started to rain. The cloud base had risen and we could now get a view of Square Top and our route.

Even with these conditions this is a great hike. Much more scenic and interesting than Bierstadt. And certainly far less crowded. It made for great conversation at Three Margaritas in Evergreen.