The “Official” climbing season is so close I can smell it in the air. It is often early Spring that I get the itch to get up on some peak somewhere. And this desire often falls to Mt. Sniktau to ameliorate. Sniktau is a great dependable peak and oddly, I never get tired of climbing it.

For this hike I was joined by a new partner, Chris Hanson. Chris and I had been working for a few weeks to get his gear up to snuff for a Winter climb. So on Tuesday, March 1, we both set off, albeit a little late towards Sniktau.

The weather was forecast to be great with moderate winds. Moderate winds on Sniktau can typically be around 30 mph steady. And indeed that was the case. We arrived at the trailhead around 10:45 am and it was already warm enough that we didn’t really have to put any other layers on besides base/middle with a hat and light gloves. Winds at Loveland Pass (11,990 feet) were light but picked up at altitude. 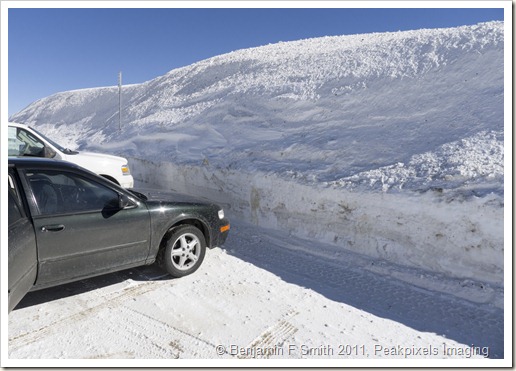 Chris and I Arrived at Loveland Pass Around

We started out by slogging up the 925 feet from Loveland Pass to the top of the ridge. This is a tough start. You step out of your car at 11,990 feet and grind steeply up to 12,915 feet. Arrrrgghhhhh…Its nasty. Particularly if you have a little of that Winter midriff spread. Not that I do.

At the top we stopped to throw on another layer as it was colder and significantly more windy. We snacked a bit and took in the beautiful Winter views of the surrounding mountains. 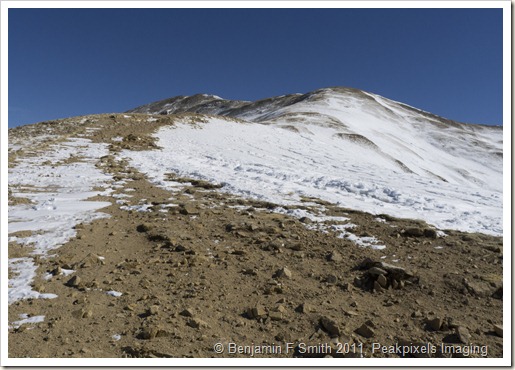 The 925 Foot Grind up from Loveland Pass

All the way up and across towards Sniktau the snow conditions were great. Nearly entirely wind scoured or hard packed. We post-holed just a couple of times and snow shoes were not needed, or taken for that matter. As usual due to the windy conditions on this ridge there were interesting snow sculpted features and sastrugi. There were a few places were previous hikers had pressed their boots into the fresh snow to have the wind later blow out the loose pack between the steps. This process leads to some very interesting (reversed) patterns. 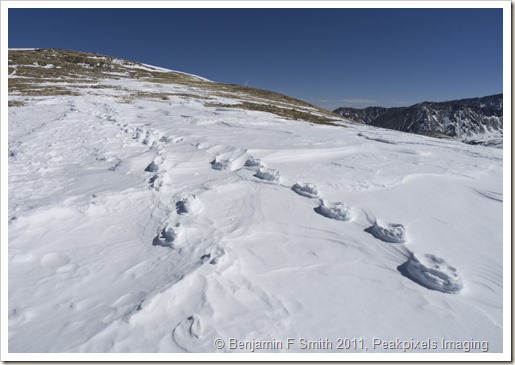 A Hiker’s Frozen Steps Recorded in Snow Near Loveland Pass

Chris and I headed North towards Sniktau after we snacked and geared up. The winds were blowing steadily from the West and we had to put on our balaclavas but otherwise we were pretty comfortable.

By about 12:00 pm we made the unnamed 13er adjacent to Sniktau (Point 13,152). Chris had to be back in town by around 3pm for other commitments. I calculated that it would be about a 60 minute round trip to Sniktau then back to Point 13,152. I told Chris we would be cutting it pretty close.

We decided to leave Sniktau for another day (hopefully around Spring Break) when we had more time. We celebrated Chris’s first 13er (Point 13,152) and headed back to the pass.

While we did not make our goal of Mt. Sniktau, the day was a good way to shake out some gear issues, Winter dictated sedentary issues, and to at least get up into the mountains. 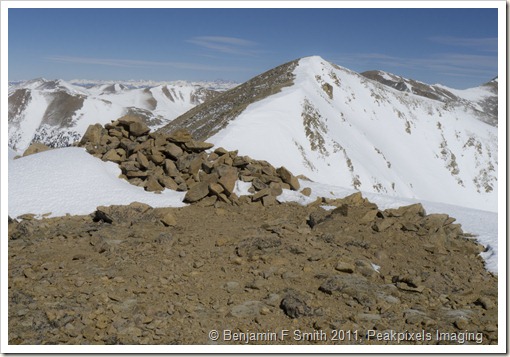 Parting Shot of Mt. Sniktau. We Will Be Back for a Visit