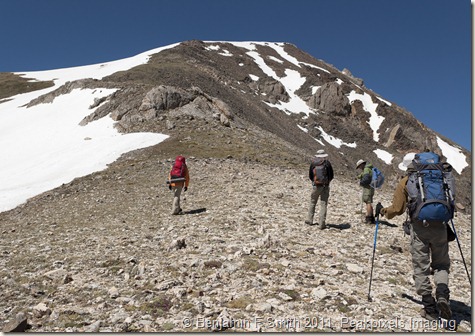 Oh to be back in the mountains again. I was feeling a little stale writing all those gear reviews. What I really wanted was to use that gear up above tree line. And finally I have. I mean really…how many dry gear reviews can one write before their cred goes out the window. I think I was close to finding out.

Saturday, June 25, I climbed climbed Square Top Mountain (13,794 ft.) as a reunion hike with a subset of my Wilderness Trekking School (WTS) students from Spring 2011. This was a spectacular climb with nearly perfect weather although perhaps a bit too hot. Light breeze, clear views, and plenty of sunshine. And it was great to be hiking with some of the very best and most fun students I have had in eight years of instructing.

Hosting this official CMC hike was Joe Griffith, a past student of mine who has since ascended to the rank of WTS director. I invited Joe along for two reasons. One, I like him and like hiking with him. Two, and more important for the students, Joe is an official CMC trip leader. I am not a CMC trip leader. So by having Joe lead, we were able to get the students halfway to a C rating in the CMC. Win Win!

Square Top is interesting for many reasons. One thing I have noticed is that there are many people who say, “Oh yah, I have always wanted to climb that peak.” However, sitting near Bierstadt and Evans, Square Top seems to be lost in the aura that the 14ers cast about themselves and therefore don’t see the traffic that a mountain that rises only 266 feet more experiences.

I have climbed Square Top twice before and I love this mountain. Its right across the street from Bierstadt. While Bierstadt may have several hundred people on a given Summer weekend, Square Top may have ten…tops. It’s a beautiful interesting peak with incredible views. After you tag Bierstadt, cross the street and give Square Top a try. Believe me…I get the whole 14er thing. But there are a LOT of great 13ers in this state. Don’t pass them by. Get up on them.

The hike started on Friday night. I met two other students and we camped at Guanella Pass on the West side. Its really quite a nice camping area and the sunsets are always superb. 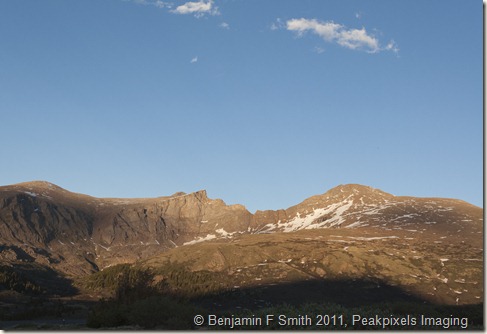 Sunset on Guanella Pass looking at Bierstadt, the Sawtooth and Evans

We all tucked in our individual tents around 9:30pm for a wake time of 5:30am. The rest of the hikers were to arrive around 7ish on Saturday. The night was very peaceful with just a light breeze and the usual slamming of car doors, outhouse doors, people laughing and such. It was a typical night of sleep at elevation (11,700 ft.) waking up a lot. Falling back to sleep…repeat..for several hours.

We all woke up the next morning and had ample time to strike camp, eat, prep our gear, and so on. The remaining hikers were a bit late coming up from Denver. The weather was perfect so there was no hurry. We had boots on trail by 7:25am.

We started down the standard trail (past the outhouse) for about 10 minutes then cut up to the ridge (that eventually leads to Square Top) where a sign says, “Trail Closed.” This trail up Square Top is vastly more interesting than the new trail which is further South. We followed our Leave No Trace (LNT) procedures to minimize impact as we ascended to the ridge hundreds of feet above. 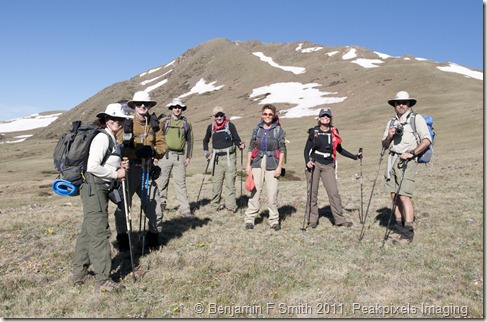 We carefully hiked up to the ridge and followed a linear gully just below the ridge top for no particular reason except that’s how I have done it in the past. The ridge was mostly clear of snow and the route finding was easy. This part of the ridge has very interesting features and it’s a little jumbled up geologically. 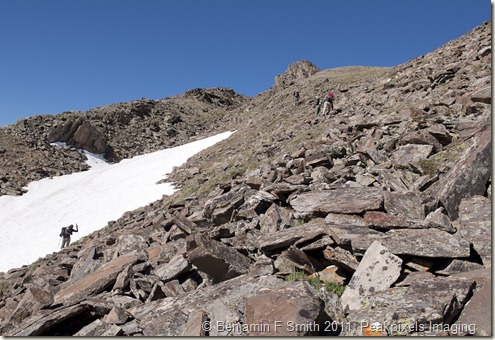 We were taking it slow as the weather was great and there was no reason (at all) to hurry. Lots of stops for photos, admiring the tundra, and shootin’ the poop (in a figurative sense). We were all having a great time. Finally, we topped out on the ridge and had our first good look at the summit of Square Top. 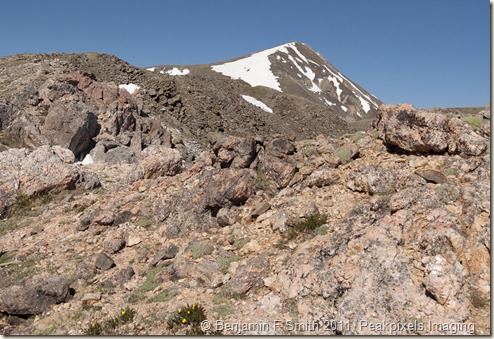 From this point on the ridge the trail eases to gentle rolling hills. It’s a very nice walk amongst interesting and varied geology and the tundra environment. We walked along the ridge top making our way to the saddle at the base of Square Top which really marks the beginning of the nasty steep portion of the climb. We all stopped here on the saddle for some food and water and planning.

From the saddle, the terrain turns much steeper, rockier, and at around 13,500 feet, is covered in snow. Perfect! This climb has everything! The team spent some time strategizing the best route up the exposed portion of the ridge and then into the snow. It did not look particularly dangerous but we just wanted to make the hike as safe and enjoyable as possible as some of the students had not spent much time climbing in conditions like this. We didn’t really want anyone missing a hold and sliding all the way down to the Square Top Lakes. 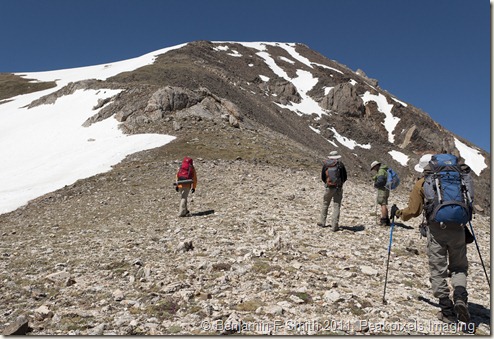 The Team Begins the Slog Up the Steep Final Approach Ridge (It Sure Looked Steeper in Person?)

Up we climbed. The team started to string out (as teams often do) along this portion as the steepness began to weed out the faster folks from the slower folks. One of my students began to slow down here. She was not tired or ill…she had just never climbed at this altitude in steep, rocky, snowy terrain and she was a little tentative.

I stayed with her all the way up the ridge helping to find the best route, making sure she was comfortable, and basically just having a good time, taking our time. 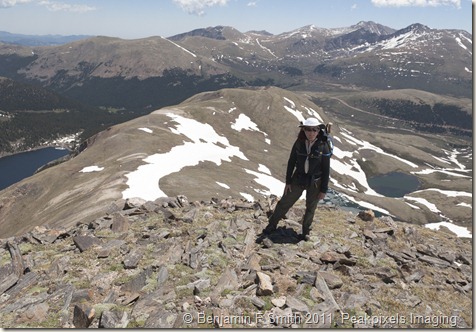 Karen, While a Little Slow, Showed Great Tenacity, Heart, and Judgment on Square Top. And She Made the Summit in Fine Spirits.

The others in the group had moved upward and were just out of sight over the ridge. We had radio contact with the higher group as well as some other friends who just hiked up to the Square Top Lakes. Karen and I were approaching the snowy portion of the ridge and determining the best route when I saw a familiar head pop up from high up above. 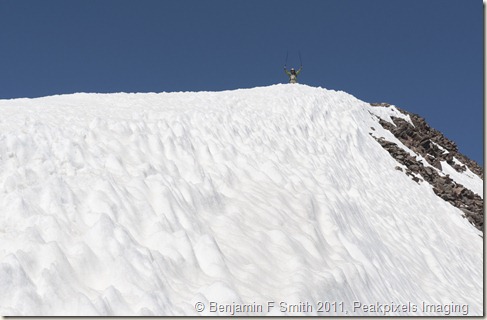 Laurence, another student on the hike, had stayed behind to make sure that Karen and I could find their steps through the snow and get back to solid rock as efficiently as possible. It was a nice move on Laurence’s part and it made the ridge-to-snow-to-rock transition a little easier.

After we crossed over the snow field it was a simple matter of climbing the gentle rounded over ridge to the broad summit that makes Square Top, well, square. 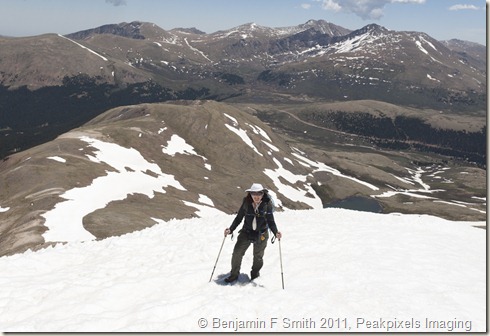 Karen Rests High on Square Top’s Ridge for a Photo Op in the Snow. Bierstadt and Evans in the far distance. 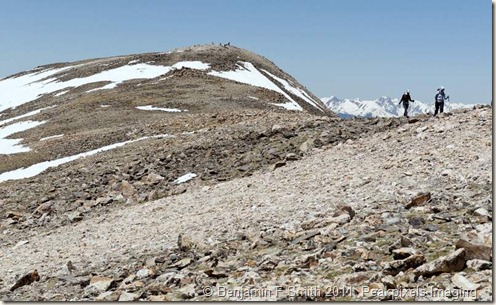 The Short Walk to the Summit. Our Team Can be Seen on the Actual Summit in Distance as Two Other Hikers Depart.

The rest of the team had made the summit several minute ahead of us. Laurence now moved on ahead while Karen and I tottered over the busted up rock and finally to the summit proper. The weather was still perfect with a strong breeze. Everyone was feeling great, enjoying the views and otherwise celebrating why we live in Colorado. 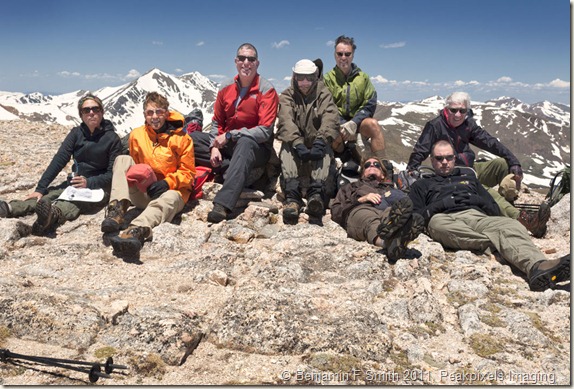 The Summit Team on Square Top (13,794 ft.) with Grays and Torreys in the Distance

It was a great day as days usually are in the mountains. The team worked well together. We all took our time and really enjoyed hiking together and we all look forward to the next big hill!

We descended via a different route that took us more to the South. This descent is more gentle and gives one some different perspectives of the scenery and of the Square Top Lakes below. We were meeting our other friends at the lakes still 1,500 feet below us. We had been in radio contact with them most of the day and looked forward to closing the loop at the lower Square Top Lake.

The hike wrapped up by meeting Tim and Cheri at the lower lake. We sat and chatted as we collected up the entire group. Then we headed back along the trail to the cars. This was a great reunion. A fantastic first summit for 2011. And one hell of a good group of people. 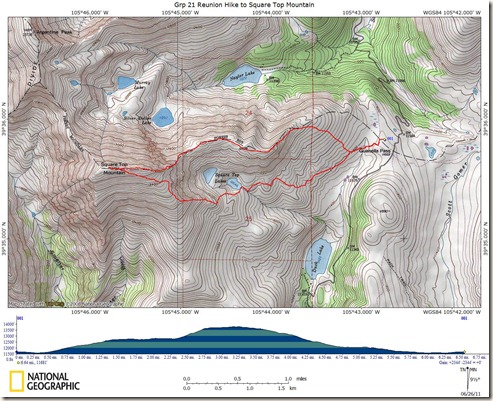 GPS Route of the Loop Hike (Click to enlarge map)