It really does not get any better than Wetterhorn Peak on a blue bird day. And that's just what the team had on Friday, Aug 22 (also my son Hank's birthday). Wetterhorn Peak (Wetter meaning weather, in some European language, and Horn meaning...well...horn) is known to attract some nasty weather. And given the technical challenge of the last several hundred feet to the summit, I would NOT want to be caught anywhere near this thing in bad weather. But we had no worries on Friday. The weather was perfect. No clouds. Slight breeze, and skies so blue it was amazing.

We left on Thursday afternoon and had dinner at NY Pizza in Gunnison. This trip consisted of the core Platinum Team; Erin, Don, Mike, and Ben. We were all VERY pumped for this trip as we planned to do both Wetterhorn and Uncompahgre Peaks on Friday and Saturday respectively. More on how that worked out later.

Don was driving his GMC Professional Grade Sierra extended cab pickup. We took the truck up the 4X4 Matterhorn Creek road all the way to the trail head. The road was pretty rough but the GMC did fine. At least on the way up. Thankfully there were two small camping areas near the trail head as we had not really seen a plethora of sites anywhere else. We set up our camp at about 7pm. Started a fire and began to get our gear organized and then hit the sleeping bags by about 9pm.

We woke up the next morning, choked down some food and caffeine, finalized our gear and set out at just a hair past 6am. The scenery on the trail was spectacular as we caught some late alpine glow as we neared tree line. 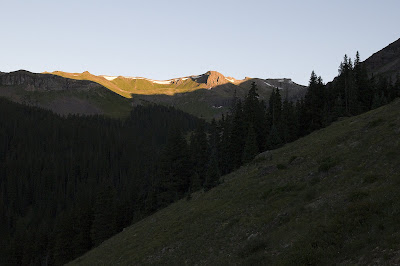 Alpine Glow in the San Juans

We continued to cruise up through the Matterhorn Creek basin enjoying the views and even spotting a huge heard of perhaps 50 or 60 elk on a ridge at about 12,000+ feet.

As we wound our way around the basin we got our first good look at Wetterhorn Peak as the sun made its way higher into the deep blue sky. 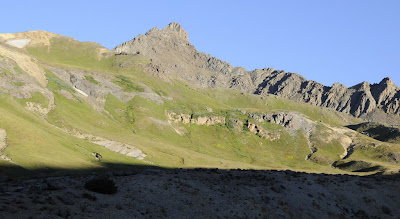 The trail goes through some interesting terrain that consists of the typical alpine tundra, then traverses kind of a cool grassy boulder field and then turns up towards the final ridge towards the summit. 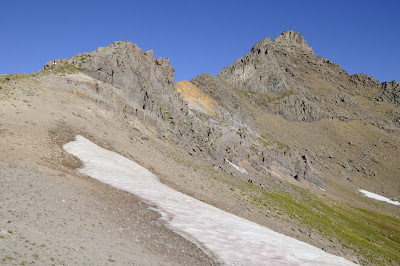 The Steep Ridge Leading to the Summit

You catch the ridge at about 13,100 feet and are then faced with a steep trudge up some very yellow and somewhat loose terrain with the imposing face of Wetterhorn towering above. At this point you begin thinking about the 600 feet or so of technical class 3 climbing needed to reach the summit. 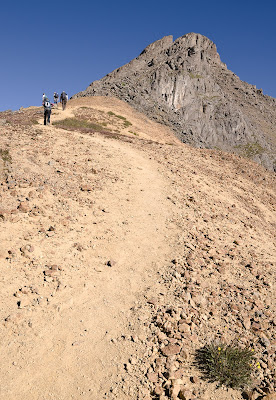 At the ridge we stopped for some refueling and a quick rest and to take in the incredible and vast views that we were treated to upon gaining the ridge. I snapped a picture of the group before we started towards the summit. 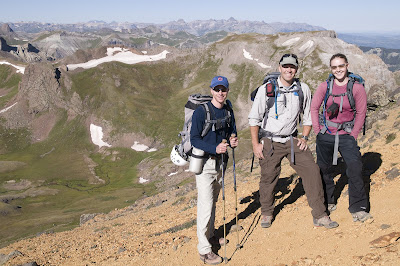 Soon after this shot we entered the technical portion of the climb. We cached our trekking poles and began the job of scouting the best route through the rocks and searching for cairns. 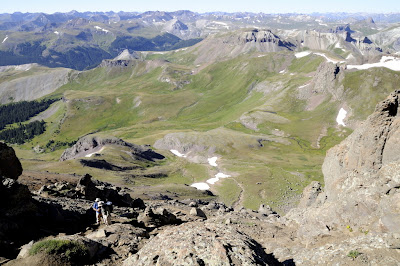 We Met two Guys (visible lower left) Who Helped us a bit with Route Finding as we Entered the Technical Portion of the Climb.

The trail was fairly obvious with a sharp eye but does differ somewhat from what is described on 14ers.com. This is not to disparage 14ers.com. I, and most other climbers, consider this web site The Gold Standard for climbing beta. But it appears that the trail has been recently rerouted a bit from what is described by 14ers.com. It no longer works its way up to the east side of the Prow. You still go through the rib as described but do not go all the way to the Prow (although you can) but rather head directly up (North) following well placed cairns. This routes is more technical but you avoid some really nasty loose scree adjacent to the Prow. At the top of the new portion you pop out into the open area described in the 14ers.com route description. I found this part of the hike the most challenging. 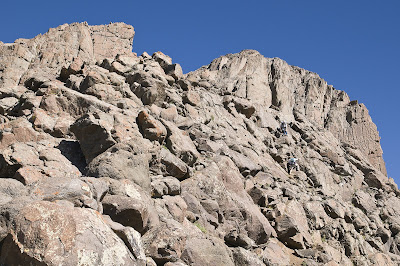 A Shot of the "new" Trail Section. Two Folks Can Be Seen Climbing Center Right in the Frame

After negotiating our way to the open area at about 13,900 feet we prepared for the final pitch to the summit. We pushed our way up and through the last notch to the bottom of the final pitch. 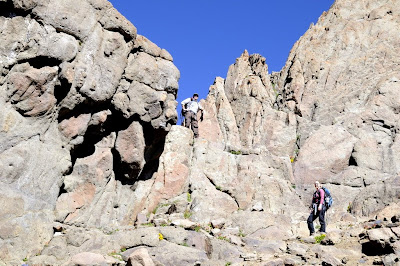 We climbed up through this notch where you then quickly traverse to the bottom of the final pitch on a huge stable slab. The final pitch consists of a very steep class 3 climb directly to the summit. Its basically a solid rock "stairway" that is easily negotiated. However, if you make a mistake you will be treated to a long and unpleasant fall, at the bottom of which you will most likely be deceased. Even with a helmet. 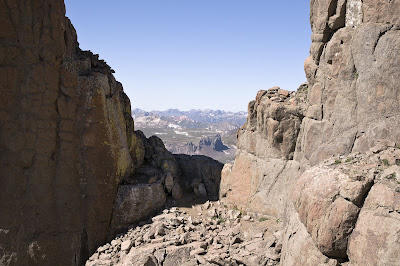 An Incredible View Through the Final Notch 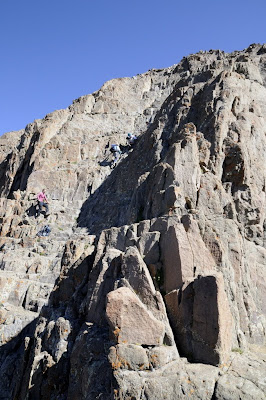 The Final Pitch to the Summit. Very Solid Rock but Steep. Erin Stands to the Left Side of the Pitch. 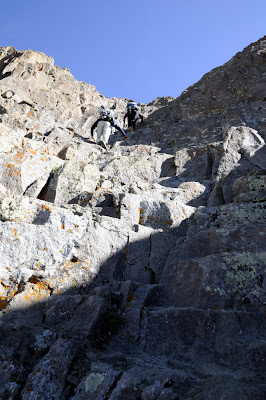 Don (lower figure) and Erin (upper figure) Negotiate the Final Pitch. I did this Pitch with my Nikon D300 on a Strap Around my Neck! (by "did", I mean climbed) 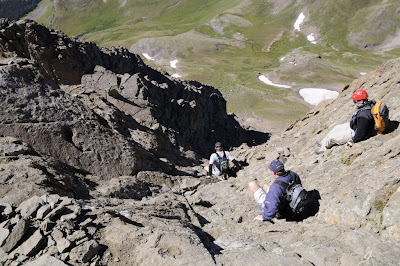 A Look Down the Final Pitch as Three other Climbers Make Their Way Back Down.

At about 10:30ish we were all on the summit and enjoying a perfect day. Peak Perfection. You don't often get such perfect weather in Colorado. But it is welcome when you do. We posed for our summit photo, refueled again, and took in the views. 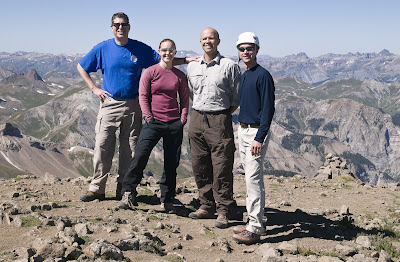 The Platinum Team on Top of Wetterhorn Peak

There were a few friendly folks on the summit and we spent a lot of time taking pictures, talking, and identifying surrounding peaks. At the summit (yes I said the summit) there was a very friendly marmot. I have seen many marmots in my time but never one on the summit of a 14,000+ foot mountain peak. Not only did it appear he lived there but this was one friendly marmot. He definitely knew how to work the crowd. 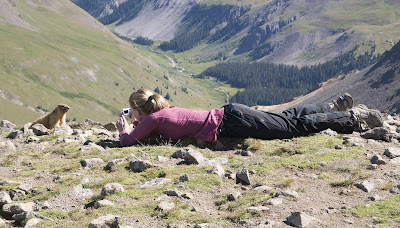 The Marmot moves in Towards Erin for His Close up

After about an hour we began to make our way home by down climbing the long technical portion just below the summit. This was not that bad. Mike and Erin went ahead of Don and me as I helped Don make his way down. Don is uneasy with heights and just wanted some assistance with the down climb.

We both made it down with no problems. We ended up heading down the route described in 14ers.com that takes you along the Prow. I would not recommend this. While the old route does save you from traversing some steep and exposed class three on the "new" section, it treats you to some very loose, steep, and nasty sections. I imagine that is why the the trail was swung around. You can't help but to cause some significant erosion and send some rocks a-flyin' by climbing down this section.

We had to wait several minutes as some climbers below us made their way up. We didn't want to send a shower of debris down on them.

The rest of the climb was uneventful and we ended up back in camp around 2ish. We relaxed a bit then packed everything away and headed off towards Uncompahgre's trail head. Unfortunately, on the way down the 4X4 road, we ripped a HUGE (about three inches wide) hole in Don's right rear tire. The tire nearly came off the rim and the rim ended up slightly damaged. We put the spare on and decided that, now that we had used our only spare, it would not be prudent to do any more four wheeling when we still had a 300 mile journey just to get home. So we regrettably headed back to the Denver area. We plan on bringing Don's lifted jeep back in the future and perhaps doing an Uncompahgre and Handies two day combo.

In hindsight we all agreed that this was definitely in the top three peaks we have climbed. The challenge, scenery, company, and the joy of the San Juans combined to make this a very special trip. 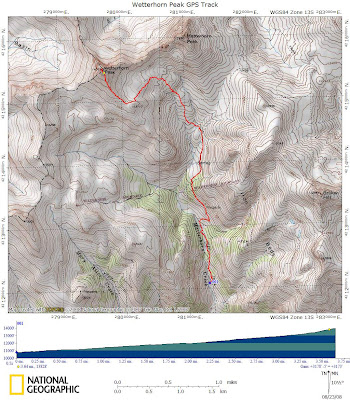 GPS track of the Wetterhorn Climb.
Posted by Ben Smith at 8:53 AM