I have climbed Mt. Bierstadt many times. It is a favorite of mine and the Platinum Team's for early season training due to its relative ease of climb and close proximity to Denver. For more than a couple of years however I have looked across Guanella Pass towards Square Top Mt. and wanted to see what that peak held. The past couple of seasons the Platinum Team has put this 13er on the list of peaks "to do" (and by "do" I mean climb) when we were not otherwise engaged with climbing 14ers.

Also, as a fluke of how my company computes leave, I found that I had to burn about 40 hours of flex-time before the end of Sept. So, I thought I would take every Friday off in Sept. I knew that Mike, as a lifer at his company also was taking many Fridays off this summer as well. So literally, at the last minute, Mike and I were able to put a climb together for Sept. 5th. Don was out of town and Erin will not be able to take another vacation day until she is 80.

Mike and I both arrived at the west side parking area on Guanella Pass around 6:45am. There was not a single car in the west lot. There were about 8 cars in the East lot presumably to climb Bierstadt. We both geared up and set out.

We were planning to climb Square Top via its Eastern ridge. There is an excellent trail from where it begins, as it were, from behind the out-house. We trundled along the trail and down a bit until we began to parallel the ridge. There is a trail junction that cuts off towards the North to gain the ridge. However it is now marked "Trail Closed." Wanting to climb via this route, and not wanting to cause undo damage we followed a faint trail North up towards the ridge. The trail rapidly petered out and we separated a bit and made our way along the hillside. I had plotted the route in my GPS from a Summitpost route description, so we generally followed these way points up the steep hillside towards the ridge top.

We could clearly see a gully along our route and consulting the map it appeared that we would need to climb the gully by its left shoulder. The gully is quite a bit larger than it appears in the image below. 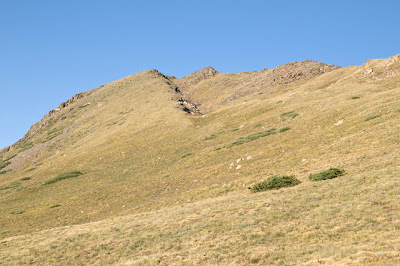 The gully as it appears from below on the hillside. The best way up is to ascend via the gully's left shoulder.

Mike and I made our way up this shoulder with no problems. We topped out and got our first view of the summit of Square Top in some interesting terrain at the top of the gully. 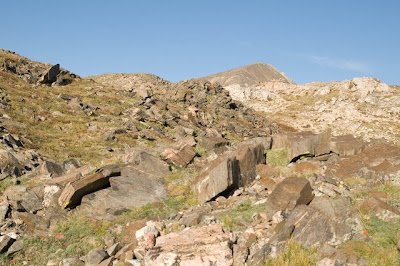 The terrain was very interesting along this entire hike. The gully consisted of fractured volcanic and columnar rock. There was a lot of white milky quartz mixed in with black fined grained rock as well.

Mike and I made our way arcing upwards steadily along the ridge towards a prominent saddle just before the going gets real steep. The wind began to pick up as we made the ridge top and meandered our way around a few high points. I am guessing the wind was blowing from around 15 to 25 MPH from a generally Northerly direction. Therefore, the right side of our faces were getting blasted. But the skies were very clear. Not at all what was forecast.

Mike and I made our way along a prominent high point and gauged our elevation in order to catch the saddle without having to gain or loose altitude. 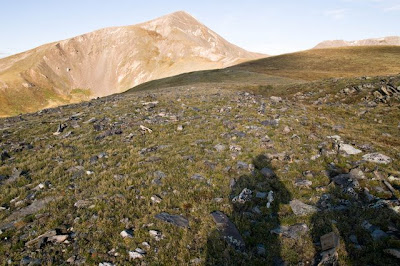 We caught the saddle and began the steep climb up toward the summit. While steep, there is nothing particularly difficult about this part of the climb. The trail is all solid rocky tundra and rock out crops. There is nothing greater than perhaps a Class 2+ in some of the steeper rocky portions.

Mike and I zig-zagged our way up the slope stopping now and then so I could breath and to fine tune our route. The "crux" of the route came near the top of the ridge and consisted of a large rounded rock outcrop. We pondered as to whether we should skirt the outcrop but in the end we took a rather obvious line directly up its center. 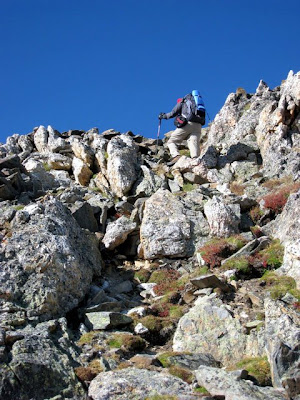 The Author makes his way up the Crux of the Ridge Route (photo: Mike O'Hearn) 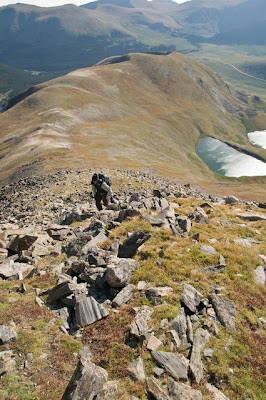 A short time later Mike and I stood upon the ridge top with about one half mile of nearly level walking to the actual summit of Square Top. This was a really cool walk. Not particularly hard, but it was cold and windy. The interesting geology and the great views really made this part of the hike fantastic. 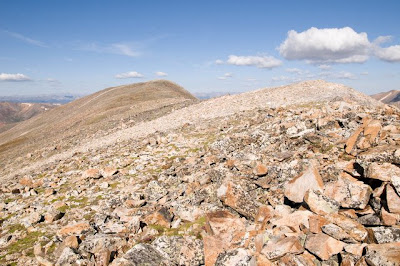 The Pleasant Route along the Ridge Top to Square Top's Summit

Mike and I arrived at Square Top's summit around 9:45. About 2:45 minutes after we had departed the trail head. We took in the views for a short time then retreated below the summit to get out of the wind and have some food. After eating and resting a bit we walked back to the summit for pictures. I brought my tripod for a summit shot but it was so windy I worried that my camera would be blown over so we just took pictures of each other at the summit as our fingers grew colder and more numb. 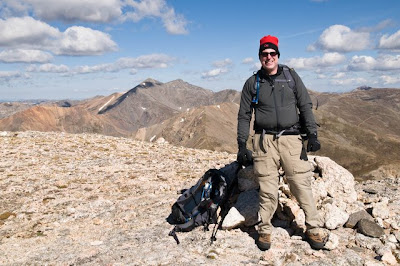 The Author at the Summit (Grays and Torrey's in the background) 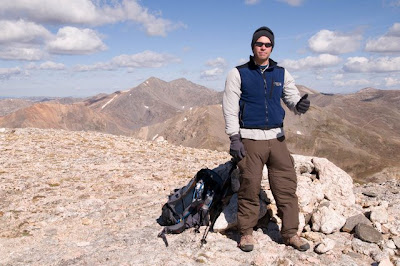 Mike at the Summit 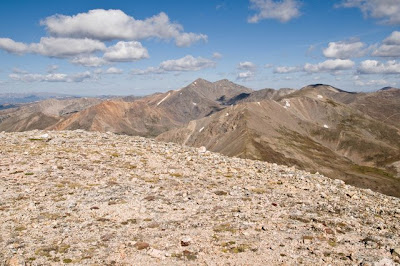 We made our way down from the top to take the more gentle Southeastern route back to the trail head. We carved a gentle descent along Square Top's Southeastern face. We descended rapidly but we could not find any hint of a trail. It turns out that there must have been some relatively recent trail realignment. We made our way down some steep slopes towards Square Top lakes. We could see the road that makes its way from the trail head to the lakes and we knew the hiking trail broke from this road and made its way up the Southeastern face to the summit.

We finally found the "new' trail near the where it breaks from the road close to the lakes. It appears to have been realigned to offer a much more gentle ascent of the mountain. The new trail now cuts further South in order to gain Square Top's Southern shoulder.

Mike and I were back at the cars around noon. We drove down into completely obscured skies into Idaho Springs for our traditional lunch at Tommy Knockers.

This was a really great climb. Easy logistics, very scenic and we did not see one other person during the entire hike. We had the summit to ourselves. The hike is in many ways better than Bierstadt. The terrain and geology are fascinating. The views incredible. And the route interesting. Next time I do this hike I will take the new route in order to avoid the closed portion and to simply tool along a more gentle ascent of this great peak. 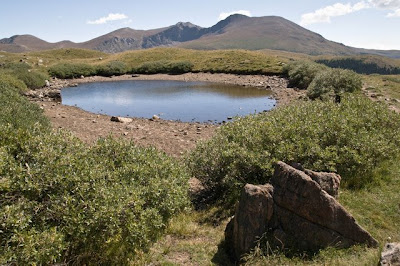 
GPS Track of the route up and return to Guanella pass appears below. 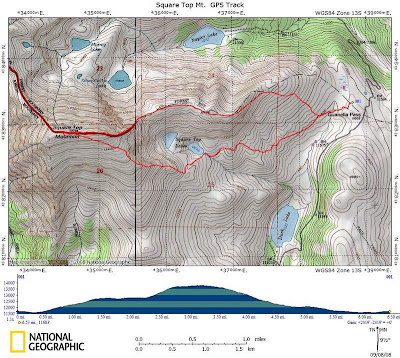 Next up...Columbia Peak via the East Ridge.
Posted by Ben Smith at 9:43 AM