Fletcher Mountain - Better Because it's Concentrated

As Summer drew to a close good weather continued to hang around the region. I began thinking of another hike. Something logistically easy, hiking easy, and fun. Something to close this season out on a positive note. It was not going to be a 14er as I have nothing left to climb close by. So I began to have a look at near by 13ers. Something in Summit County perhaps. And there are plenty of 13ers. One must remember that while there are 54 "official" 14ers in Colorado, there are nearly seven hundred 13ers. That's quite a bit to choose from.

I started talking to fellow Platinum Team member Don Lochner to see what we could settle on both peak wise and schedule wise. As it turns out we were both available on Friday, October 3. After going over some 13er guide books and looking on Breckenridgeclimbing.com (thank you Bill Middlebrook) we settled on Fletcher Mountain.

Fletcher Mountain at 13,951 feet, is located immediately to the West North West of the 14er Quandary Peak and shares the Monte Cristo trail head at the Blue Lakes Spill Way. The dirt road to the spill way is in pretty good shape with just a few short rough spots. Any high-clearance vehicle would make this drive and probably most non-low rider cars.

Don obliged to drive to try out his new tires replaced after having the flat earlier in the season after we all climbed Wetterhorn. We started a bit later than normal as the weather looked decent.

So, at 7:15 we started out from the spillway and were immediately greeted by spectacular scenery, which would continue to be a theme for this hike. 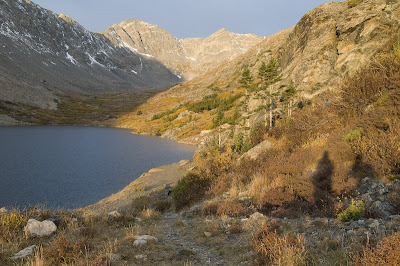 We skirted around Upper Blue Lake looking for the trail junction where the hike turns North West up into the first basin. We did find the trail...but we didn't know it. We found the junction marked with cairns where it turned sharply North. We followed this trail for a few hundred yards steeply up hill. After a while Don and I stopped to take stock. We thought, wrongly, that this must be the trail for the steep ascent up Quandary's Southern face. If we had continued just a bit further we would have seen that this was indeed the correct trail. But we did not.

We headed back down to the lake and blazed our own trail over busted up rocks and boulders eventually catching the actual trail a few hundred feet up. The difference between the correct trail and the trail we blazed can be seen below on the mapped GPS route. We did take the actual trail back down on our descent.

After capturing the correct trail we cruised pretty fast over relatively level ground in the first basin. We made our way to the back of the lower basin along beautiful alpine tarns and willow where we got our first look at Fletcher's summit and the headwall we needed to negotiate to get there. 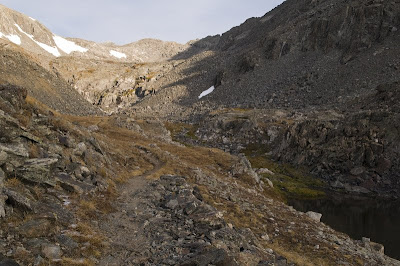 The Headwall at the back of the Lower Basin. Fletcher Mt. is in the distance barely visible

This is where the hike got "concentrated." It is only about 2 miles from trail head to summit. But there is a lot packed into those 2 miles. Climbing up from the lower basin to the upper basin involves nothing specifically technical. However, it is required that one climbs about 900 vertical feet up pretty rough, rocky, and steep terrain and requires one to take their time and do careful route finding and careful foot placement. There are only faint trail segments in this portion of the hike. There are cairns to mark the trail but you must keep an observant eye out to spot them.

The first part of this ascent involves climbing up and out of the alpine tundra of the lower basin and on to the more rocky upper portion. We chose to simply move up the rocky slope staying to the left of a snow field. We could have traversed right up the snow but this early in the day it was still quite solid. We did not have ice axes and the run out, if we were to slip, ended up in a field of talus. 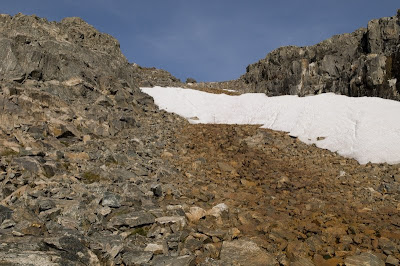 The Lower Portion of the Basin-to-Basin Climb

We exited near the center at the top of the slope pictured above, which led us out and into the upper basin.

When just looking at the basin-to-basin climb, the trail actually travels through what looks like a rather improbable route. It looks as though there are easier routes, but if you follow the cairns you will be treated to a rather pleasant, scenic, and efficient hike up very rocky and steep slopes.

At the top of the slope you will be greeted with a vast high altitude terrace from which Fletcher Mountain rises. This basin sits at about 13,300 feet and allows a brief respite of relatively level hiking before the last 650 feet of steep, and yes, rocky climbing to the summit. 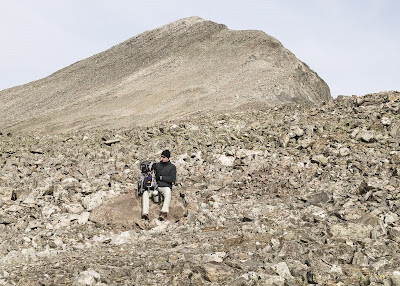 Again, on this last push there were some cairns, faint trail segments, and even one crescent shaped rock shelter to guide you. But this portion of the hike is mostly easy route finding through rocks and boulders to the summit. Don pushed on ahead as I lallygagged behind taking pictures and breathing. 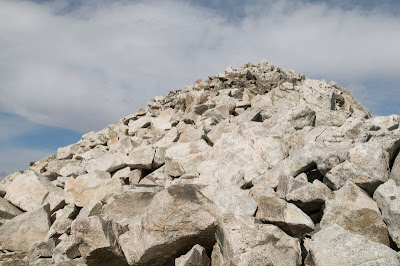 The Last Few Feet to the Summit

From the summit we were treated to spectacular scenery of surrounding 14ers, 13ers, and just generally magnificent stuff to look at. Fletcher is a great mountain and at 13,951 feet it is just 49 feet short of a 14er. 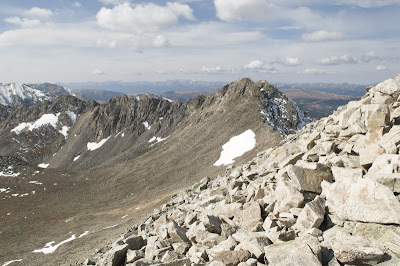 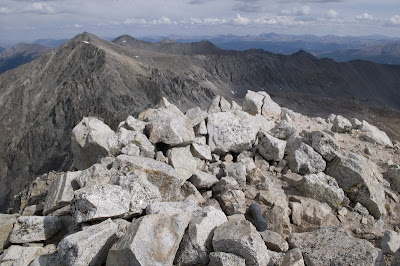 Pacific, Atlantic, and Crystal Peaks with Grays and Torreys in the far Distance 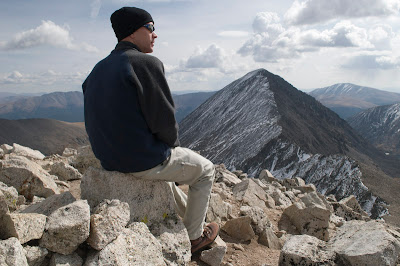 We stayed on the summit for about 45 minutes and signed in at the register. The weather was still good but the clouds were building and we could see snow falling from some of the larger cumulus cells. So we took our summit shot and packed up to head on down. 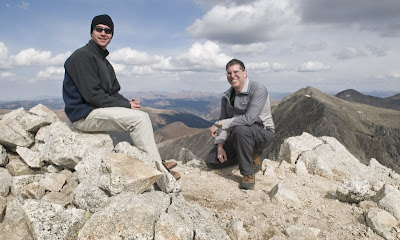 We headed on down into the upper basin where we ran into the only other hiker we saw that day. We talked to him for a while until the snow, graupel actually (snow pellets), started to fly. It continued to snow, at some times quite heavy, for most of our descent. There was one short period where the sun came out but it was soon replaced again by heavy clouds and snow pellets. The temp was comfortable so the hike back down was fine although the rocks, particularity in the basin-to-basin down climb, had become quite wet which added a distinct risk of slipping. 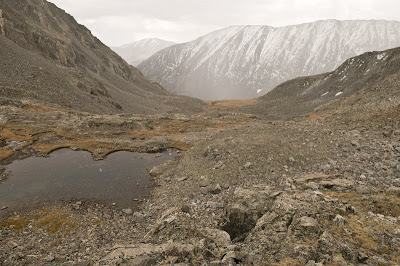 A Tarn in the now Quite Damp Upper Basin 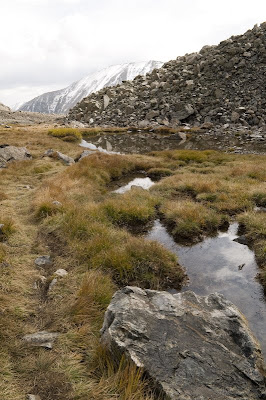 A Great Trail through the Lower Basin

Don and I finally arrived back at his truck around 2ish. It was a great day. Fantastic scenery, challenge, and a great summit. There is a lot packed in to this relatively short hike. Its better because it is concentrated. 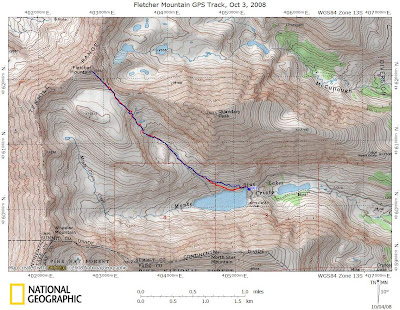 GPS Track for Fletcher Mt. Red is Ascent Route. Blue is Descent Route
Posted by Ben Smith at 9:10 AM