I am amazed how much the mountains can still surprise me. This was my 34th new Colorado 14er and I was still not quite prepared for what this route offered.

Mount Columbia via the South East Ridge is a scenic and unique hike. It is also a long, long slog from 9,400 feet to the summit at 14,073 feet. On paper it looked as though it should take us about five hours from trailhead to the top. In fact, it took us seven hours to the summit in what seemed like a never ending ridge-rollercoaster trek up and down a long steep and curving shoulder of this great mountain. There was nothing particularly technical about the climb but it did require concentration and perseverance.

Add to this another fours hours down via the “standard” route directly down into Cottonwood Creek. This descent route, we theorized correctly, would be a faster and easier route than our ascent. All in all this was nearly thirteen miles of tough, long, and mentally challenging hiking. It took us about 11 hour total time.

All this is true. But Mt. Columbia also delivers some amazing and unique terrain with areas of open woods, unusual and surreal forests stands of dead pines, and rugged expansive views of the surrounding great peaks.

On Friday, Sept 12 the team headed out of Denver towards Buena Vista where we stopped for Dinner at Jan’s at the behest of a service station worker. We had stopped to ask him where we could get some good Italian food. He said Jan’s right across the street. So that’s where we went…Jan’s.

The place was nice enough. Although at 4:30 it seemed more tuned to the geriatric crowd and other persons who may typically make it an early evening. We sat down and had a look at the menu. There was not one single Italian meal listed. Nothing. Not even close. We stayed and actually did have a decent meal consisting of typical continental American fare including roast turkey and dressing, burgers, chicken fingers, and the like.

We were then off to find a camp site near the trailhead. And that is exactly what we found. For the South East Ridge approach to Mt. Columbia one drives to precisely where the CO Trail crosses CO Route 365. There is a large camping area right at the trailhead that is flat and quite nice excepting a preponderance of various wild animal pooh. This pooh was however easily avoided and we set up camp.

We completed the normal camp chores and turned in around 9ish. The next morning we woke up a bit late; around 5:25. By 6:30 we were off and climbing the Colorado Trail to where it forks off to the Columbia Route with me in the lead. Unfortunately I missed the unmarked fork but realized it relatively quickly. From here we just charged up a hill directly to the approximate location of the Columbia Trail at the ridge top. This part of the trail was a well-wooded ridge hike to tree line, where the hike started to get more interesting. Up till now we had hiked through pine forest occasionally scrambling over a rocky out crop. At tree line the scenery opened up into a very unique and very surreal landscape of dead standing pines. 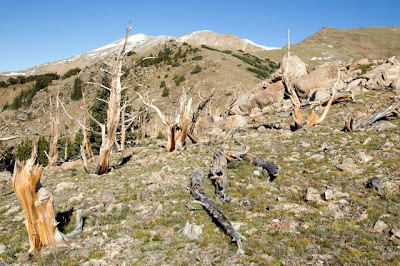 A Surreal Landscape of Dead Pines 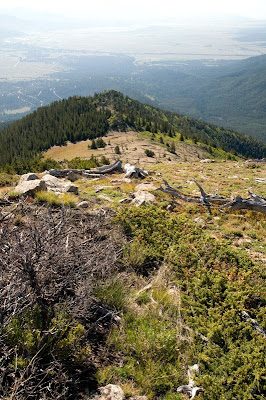 Looking back Down the Ridge Towards Buena Vista

From here the team began grinding its way out of 12,000 feet and into the teens. We skirted to the left (South) of the ridge following faint trail segments. Eventually we made our way up to our first 13er; Point 13,298. 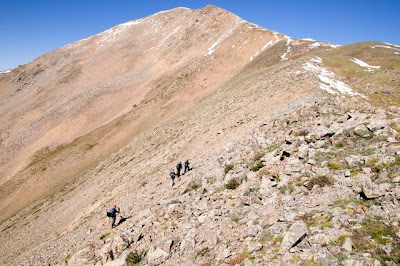 The Team Climbs to the Top of the Ridge with Point 13,298 in the Background 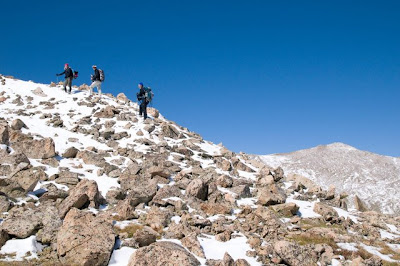 At the top of Point 13,298 we got our first look at Columbia. Prior to getting to this point we had assumed, wrongly, that the actual summit lay close behind Point 13,298 and that after attaining this “crux” we would have a short jaunt over an easy ridge to Columbia’s fine summit. Unfortunately this was not the case. In fact, it was not nearly the case. We were still miles away. This is the view that greeted us on top of Point 13,298. 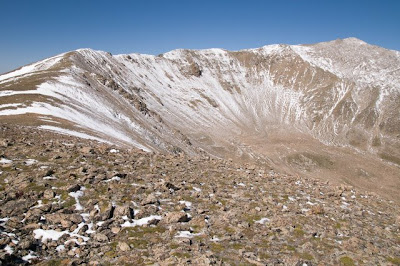 The First Look at Mt. Columbia and its Long SE Ridge

Mt. Columbia is the high point way way on over to the right in this image. We still had to follow nearly two miles of arcing up and down ridgeline at altitude before we could stand on the summit. It was already about 11 AM. Usually our team is leaving a summit at 11AM. But this day, we still had two hours of hiking/climbing to go. But as can be seen above, the weather was Blue Bird so off we went.

Up and down, up and down we hiked as we tried to pick the best line along the ridge. There were some faint trail segments here and there but they were rather faint until we intercepted the standard route as it joined up on the ridge. Below you can see that this hike is a roller-coaster ridge with many ups and downs. 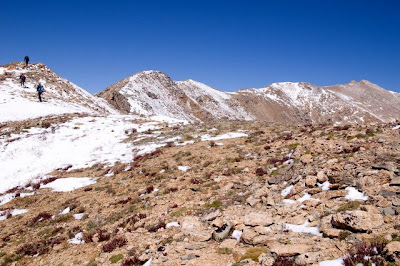 Traversing the Final Miles of the Ridge with Mt. Columbia far Right

Snow had fallen the previous day as a cold front came through. Mostly the snow was just a few inches deep but there was one point I post-holed to my knees in an area where it had drifted below the ridge top. The snow was not really a factor in this climb.

At about a half mile from the summit we intercepted the standard route trail and began to see other human life. People here and there. Coming and going, to and from the summit. We had not seen a single person up until this time. We now had a more definite trail to follow, which we did through rock and snow.

After climbing over the last prominence we were within a relatively short stretch to the summit consisting of a rather pleasant level area of high-alpine tundra. 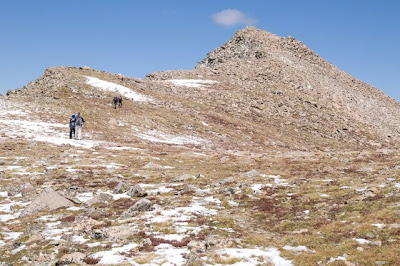 We crossed the tundra and were greeted with an array of chaotically placed boulders that required some easy scrambling. It was at this point that I heard what I thought was a distant rumble of thunder. Whenever one hears thunder at this altitude it can be a rather scary affair to say the least. In fact it can cause nearly instant incontinence. Fortunately, this day, it did not do that and the sound was not thunder. It was merely another hiker who had sidled up behind me and dislodged a rock, which only sounded like thunder. On I climbed.

The picture below shows to smallish points. One climbs up between these points and then has a short upward hike to the final, and surprisingly small, summit. 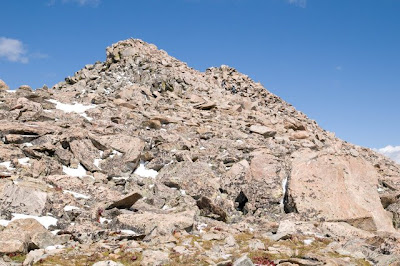 We were all on the summit by around 1PM. It took seven hours of dedicated and sometimes frustrating climbing to get us from trail head at 9,400 feet to summit at 14,073 feet. The weather was still great. We still had blue skies with just a few non-threatening fair-weather cumulus clouds. The temp was probably in the mid 40s. It did get rather cold on the summit when clouds finally blocked the sun and we decided to make the long trip back. We knew we still had a very long hike ahead particular, and wisely, as we had decided to return via the standard route.

I had brought my tripod as I typically do but was helped out by a fellow summiteer to take the team summit shot. We all posed with Mt. Harvard in the background far right. 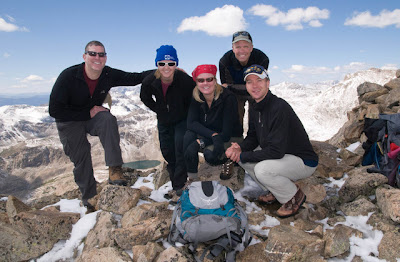 The team split up at this point as Mike and Erin pulled out ahead on the return followed by Sara, and finally Don and me.

Let me say this now. After down hiking the standard route I have no idea what insane person or group thought it was a good idea to put this route in were it is located. It appears that this trail may have been recently constructed, or formalized, by the CFI as I saw several trail “whiskers” and other evidence of recent trail building.

To call this portion of the hike a trail is somewhat misleading. After analyzing data from my GPS and National Geographic Topo! I determined that on the steepest portion of this trail section one must negotiate themselves from 13,550 feet down to 11,600 feet in the length of about ¾ of a mile. This measured out to be a 50% grade, or a 45 degree slope that drops the unfortunate hiker nearly 2,000 feet in less than a mile! There is another geographic term for this sort of “slope.” Its called a cliff. Below is a look down this section. 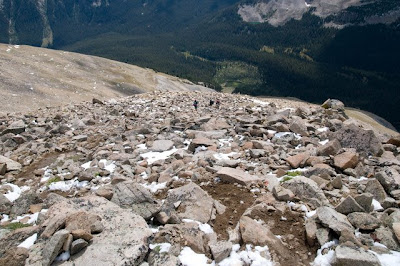 The picture pretty much tells the story. There are no switch backs to speak of. The path pretty much bores down the slop with little relief and a uninspired meander here and there. On the plus side you dump altitude rather quickly. Looking back up the trail I thought who the hell would climb UP this thing. I mean really. I have climbed many many Colorado peaks but I have never seen anything quite like this. This trail segment presents the hiker with 2,000 nearly vertical feet from Cottonwood Creek to Columbia’s ridge. As unpleasant as it was to descend, it would be positively miserable to climb.

Don and I stopped a few times on this slope as the light snow that had fallen and the lighting made for some amazing views of Columbia’s neighbors, Mt. Harvard and Bear Lake. 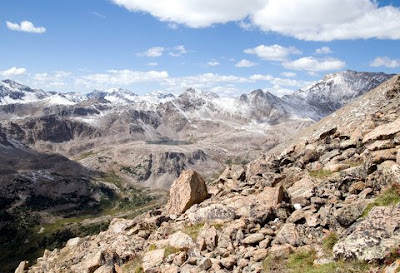 We continued to take in the views as we rapidly descended the slope down into Cottonwood Creek. On this return hike we covered about six miles in four hours and finally arrived back at camp around 5:30.

This was a miserable and rewarding hike. It was tough mentally and physically but did present the hiker with incredible views, challenge, and uniqueness. Just make sure you have a long day to do this route with cooperative weather. I would not want to repeat this hike but I do have satisfaction that I have completed it. 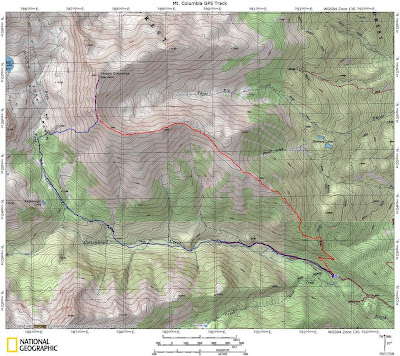 Red is Ascent Route, Blue is Descent Route
Posted by Ben Smith at 9:12 AM