Castle and Conundrum Peaks – No Summits, But We Did Get Really Cold and Wet

Castle Peak is arguable the easiest 14er in the Elk Range. I have climbed this peak in the past and found it quite fun. However, on the 14th and 15th, the weather, that has been so darn reliable this season, was not to cooperate.

I met a group of mostly Colorado Mt. Club (CMC) hikers and others including my longtime hiking friend Don for this hike as it was arranged by another friend Norm. Don and I drove up Castle Creek Road to meet the rest of the group at a trail head around 11,400 feet. The road to that point clearly did require a decent 4X4. But the road/trail is not as bad as some would have you believe from the trip reports. 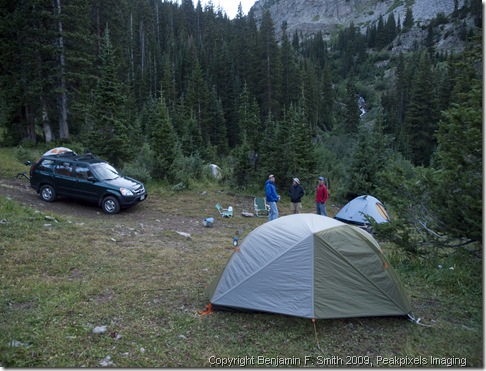 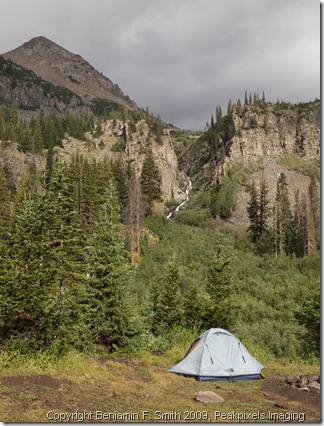 My Tent and View at the Camp Site. There were Several Streams in this Area like the One Pictured in the Background

In fact, one person in our group, Robert, drove all the way up to the trail head in a Honda CRV packed with four people. See details later in this blog.

We decided on an early start due to the really crappy weather forecast calling for a 50% chance of rain and thunder storms. We hoped, (in retrospect our hopes now seem based on the optimism of foolish youth) that perhaps the forecast may have a window of opportunity that would allow us unfettered access to these two summits. We did not have to wait long for the bad weather. We all turned in around 9ish PM Friday evening and we were lolled to sleep by lightning, thunder, and of course a good rain storm that lasted most of the night.

We awoke on Saturday morning as planned and the rain had stopped. The clouds were, at this point, broken and stars were peaking in and out. This was to be the best weather we would have because conditions deteriorated from here. 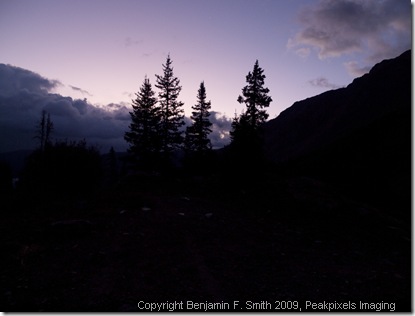 Sunrise on the Trail to Castle Peak

We began hiking up the road to wait for the rest of the group at the “official” trailhead where Pearl Pass Road splits off from the mining road that heads up towards Castle Peak. We waited here about 10 minutes for the remainder of the group. 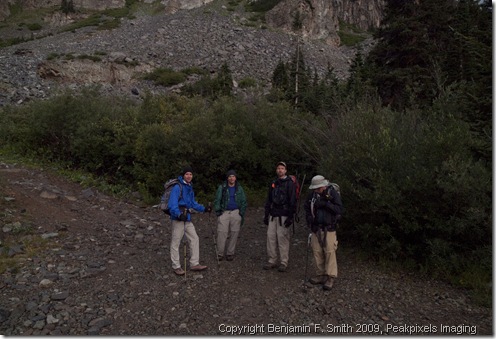 Don, Bob, Robert, and Norm Wait for the Remainder of the Group

Unfortunately, the rest of the group did not show up as they had had a flat tire coming up the road on Friday. We did meet Tiffany and Erin later in the day. 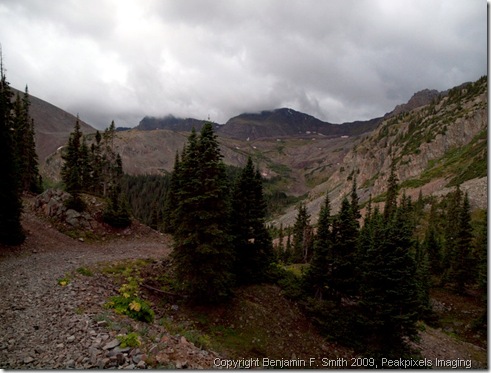 We began hiking up the road into some sloppy and gloomy conditions. It was breezy and cold and alternately spitting rain. Eventually the rain became steady and rather hard. We even heard one rumble of thunder but did not see any lightning. 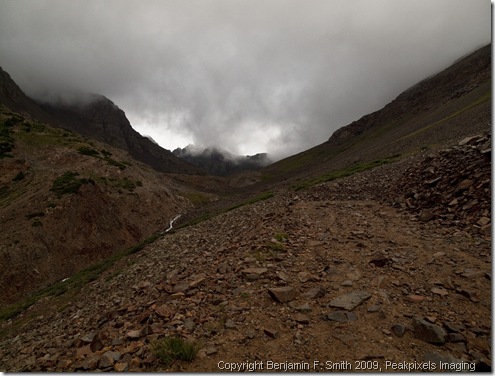 The Impending Gloom Through Which We Were Ascending 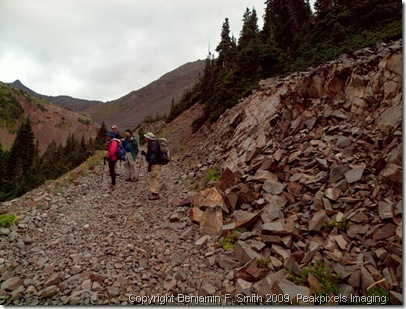 The Group Sizes Up the Situation

Finally the rain became quite hard and steady. We could see the very low clouds whipping over the summits we intended to climb. We also saw a few people passing us as they descended. They had all decided to bail due to the weather.

We eventually climbed to the base of the first basin just below 13,000 feet. At this point in the hike we were becoming pretty miserable, cold and we could see that even if we were able to make the summits, it would not be a pleasant hike. So regrettably we all made the decision to bail.

On the way back down we ran into Tiffany and Erin, who were heading up, and found out about he flat tire. The two ladies continued up the trail and made it to the same point we did at the base of the basin at around 13,000 feet.

It continued to be crappy weather as we walked back down. At times the sun did come out and gave us some short lived hope for the climb, but eventually we resigned ourselves that this would not be the day we would summit Castle and Conundrum Peaks. 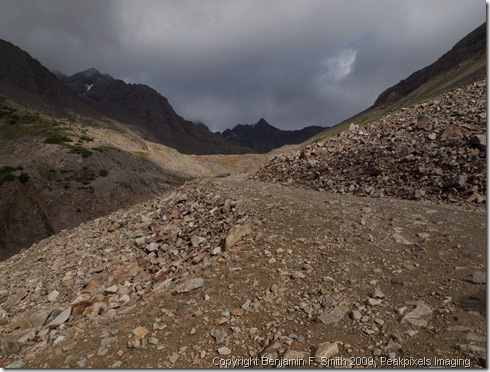 This is the Same Spot Shown in the Photo Above, Perhaps about 90 Minutes Later. While it was a Bit Brighter, You can See the Clouds Still Thick Around the High Peaks

As we all walked back to the trail head we decided it would be much more fun to find a place in Glenwood Springs to eat a nice hot and tasty brunch. And that's what we did. It looks like Castle and Conundrum Peaks will have to wait for 2010.

The only impediment to this plan was getting Robert and his Honda CRV across the stream. This crossing was accomplished by connoitering and reconnoitering the approach and exit to the streams and then careful directions to Robert, who eventually negotiated the stream perfectly. 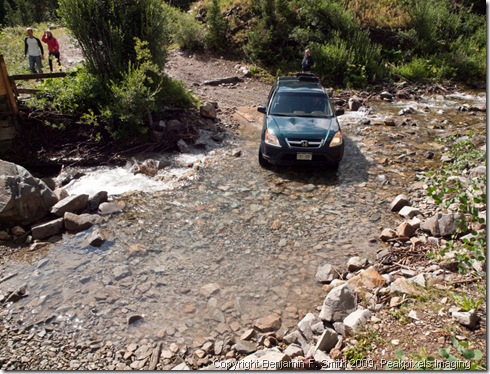 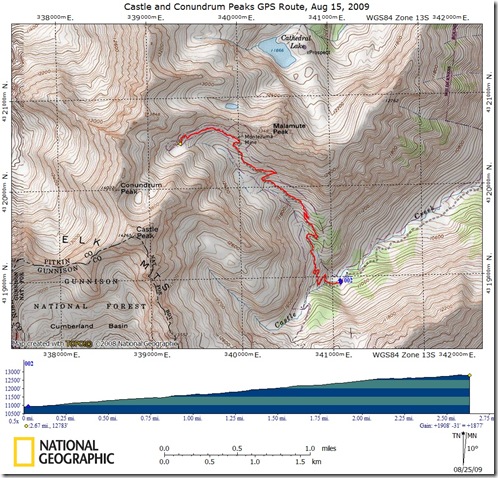