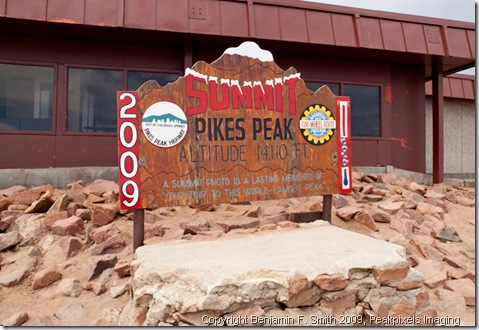 I think everyone has joked about the proverbial “Coffee Shop” at the top of any given 14er that one happens to be climbing. The funniest part of the joke now, is that on top of Pikes Peak there really is a coffee shop…and a donut shop, and soup/chili in a bread bowl cafe, and a full on gift shop…

When we decided to climb Pikes I was prepared for a bizarre mix of 14er climbing and kitschy Park Service marketing and sales. And actually we did get all of that. But, I was not expecting the beauty and uniqueness that the Crags to Pikes summit hike delivered. While the attainment of the final summit is truly an exercise in surreal outdoor activities, Pikes is ultimately a very worthy hike.

Don and I left the Denver area relatively early on August 28th as we wanted to get a campsite at the Crags Campground. Being a Friday, we thought that the spots may go fast.

We arrived around 4ish and found a great camp spot. Don and I set up our tents and generally got everything set up. It was a really nice spot near a small stream. We had time before dinner so we both kicked back for a bit and and relaxed and did some reading. 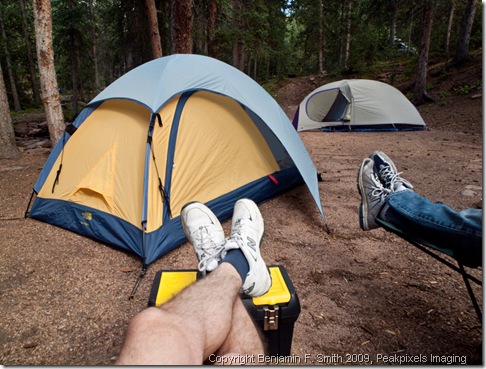 Don and I Relax in Some Lounge Chairs. Ahhhhh…Camping

Around 5:00pm we both headed into Woodland Park for dinner. We returned to the camp site and eventually headed into our respective tents for a 5am wakeup call.

The forecast for the 29th was generally good with the familiar prediction of thunderstorms after 12pm. We wanted to get started early so that we would be out of the donut shop by noon to avoid any thunderstorms while we were still near the summit. 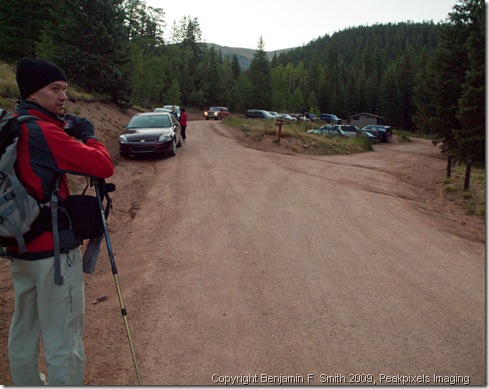 Don Geared Up and Waiting (Impatiently) at the Trailhead

We unnecessarily drove the few hundred yards from our camp site to the Crags Campground Trailhead. Even at this early hour all the parking spots were taken and we had to park along the road.

Oddly there were a few camp sites immediately next to the trailhead parking area. While the camp sites were indeed esthetically pleasing, I can’t imagine how miserable it would be to have throngs of hikers and their vehicles parading just a few feet from your head. But hey…Its only $12.00 bucks.

We started the hike through some very pleasant pine forest as we gently ascended towards the summit, still miles (many miles) away. 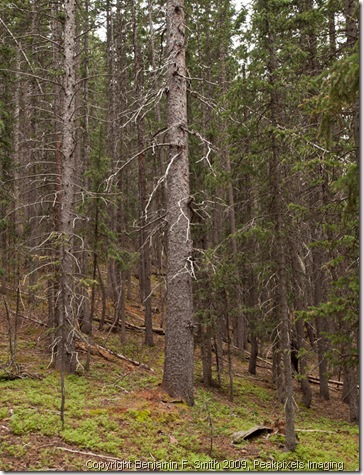 The trail eventually starts to climb steeply as it nears tree line. It winds and switch-backs around some very beautiful scenery. I don't particularly like to hike that much in the trees. But this trail and setting was rather pleasant. 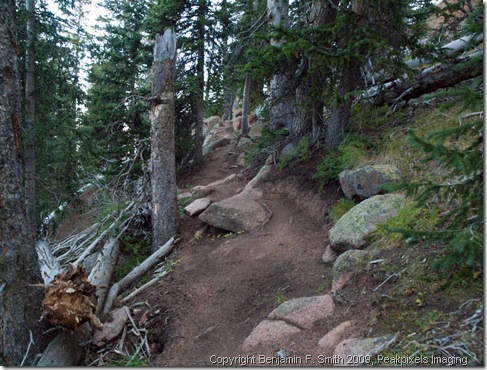 An Interesting, Rocky, and Beautiful Hike in Tree line 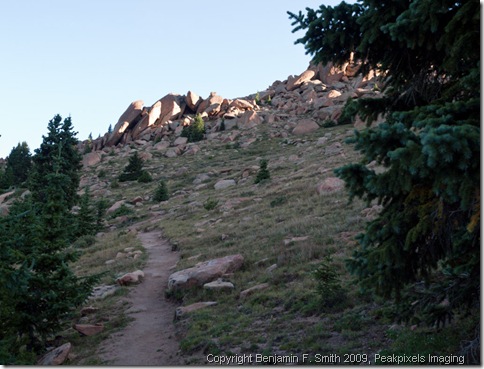 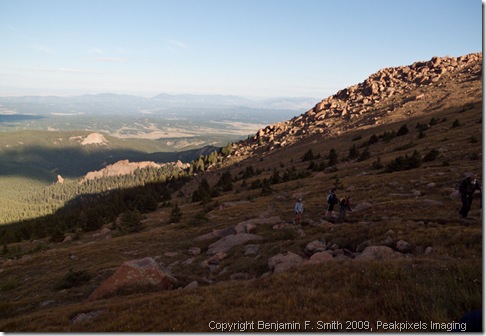 Looking Back Towards Tree Line From Below the Saddle near 12,500 Feet 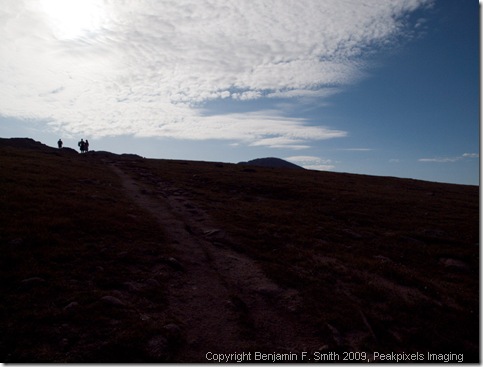 We attained the saddle and finally had a good view at of Pikes Peak Summit. This next approximately two mile section stretches from the saddle all the way to the summit base and winds through some very interesting rocky terrain, prominent rock ribs, alpine meadows, construction zones, Pikes Peak road. You know, the usual stuff you see on a 14er. The trail also winds around Devils Playground. An area so named because of the high number of lightning strikes that this prominence receives. 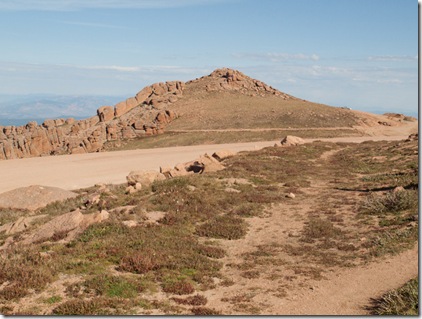 Devil’s Playground. You Don't Want to be Here During a Thunder Storm, Unless You Want to be Turned Into Carbon.

We both tooled comfortably along this relatively easy and very scenic section. We chatted with some nice folks that we were leapfrogging on the trail and just generally enjoyed ourselves. 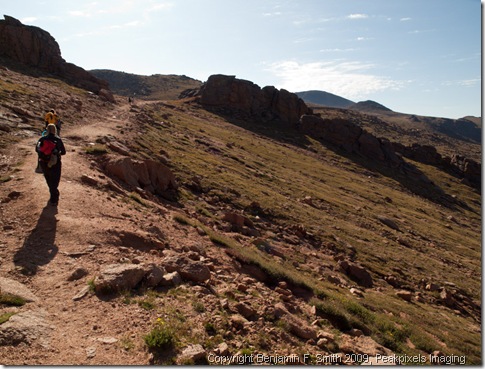 This Part of the Trail is a Scenic and Easy Cruise 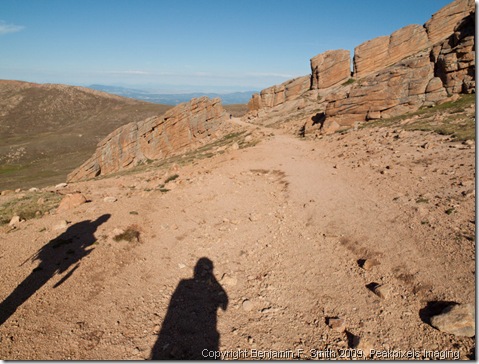 This section also parallels the road for short distances. It is really more odd than unpleasant. It just seams somehow wrong to see cars whizzing by kicking up dust and exhaust as they too struggle their way to the summit festivities. 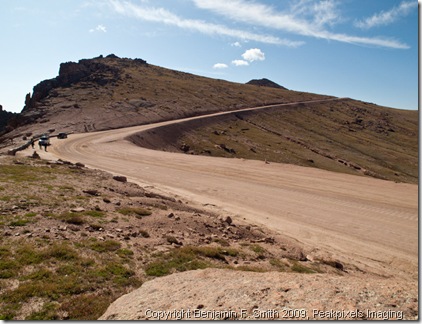 Pikes Peak Road Just After Devil’s Playground. The Trails Wraps Around the Left of the Road and Heads Up the Hill.

Don and I continued along the obvious trail, which was punctuated by overly large and abundant cairns. I am not sure why the trail is so ridiculously well marked. I mean Erik Weihenmayer (http://www.touchthetop.com/) could follow this trail. 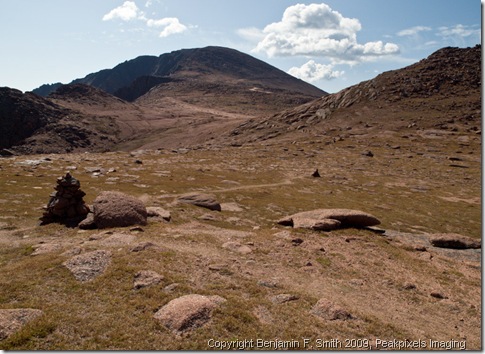 The Obvious Trail Marked by the Completely Unnecessary, Abundant, and Large Cairns With the Summit Towering in the Background

The two of us quickly crossed this final gentle section of the trail and made our way to the second and last steep section, the final summit push consisting of about 800 feet of rocky (but not technical) climbing to Pikes Peak summit. 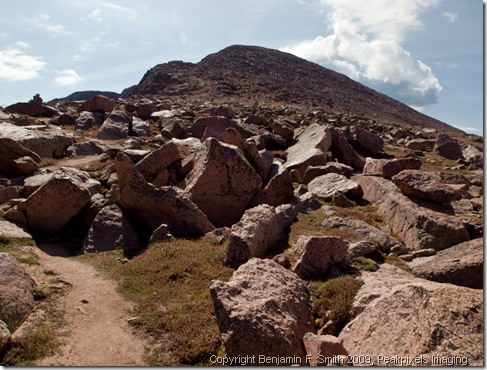 The Base of the Final Pitch to the Summit

This final steep section is really your last grasp of “normal” 14er reality. At the top of this pitch, at the summit, things will change rather abruptly and somewhat unexpectedly.

The final pitch is typical steep summit-push boulders and talus. Its fun picking your way through the abundant cairns and the well formed trail. 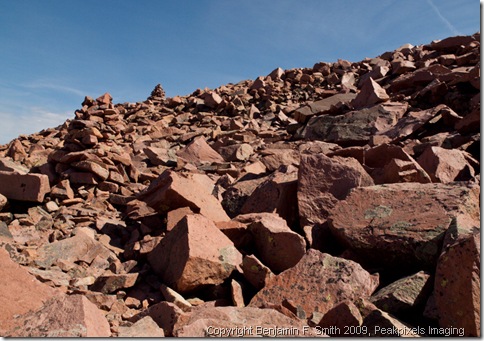 So here you are picking your way up the trail laid into the red jagged rock of the summit. Passing cairns. Seeing people behind you struggling below up the same trail segments that you had just completed in the thin atmosphere at 14,000+ feet. Your thoughts turn towards the summit that is just 100 feet above you. As you continue to climb you look up to see where the next portion of the trail is and you see…A friggin guard rail. And the road. 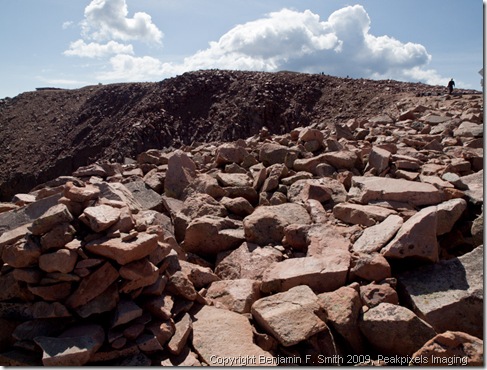 As you push up over the last steep part you can finally see the complex at the summit that consists of an Army High Altitude Research building and the larger (huge really) Visitors Center. 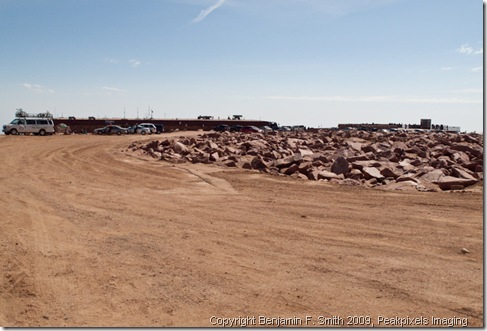 Here is something You Don't See On Every 14er. Or really Any Other 14er. Cars, Tour Vehicles, Non-Athletic People Eating Donuts, and so on.

Don and I topped out over the edge and strolled across the parking lot (yes…parking lot) to the visitors center (VC) for a hardy bowl of soup/chili in a bread bowl and some of those world famous Pikes Peak donuts.

When we arrived at the VC it was absolutely packed with people. The Cog Railway train was in station. When the train left about 25 minutes later most of the people left and the VC was much less crowded.

Don pushed his way towards the counter to order lunch. I miraculously found a table and took off my pack and stowed gear. 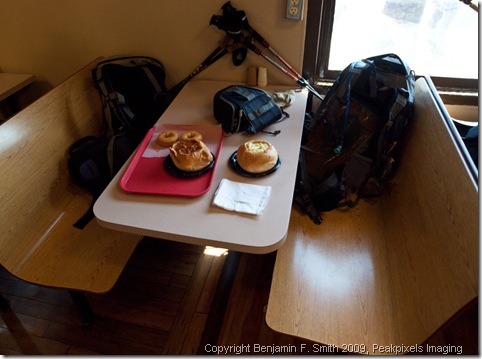 It Really is Hard to Beat Soup in a Bread Bowl and the Donuts Really are Quite Good. Beats a Crescent Shaped Rock Shelter.

The soup was really quite good and the donuts excellent. I had the chicken noodle soup and Don had the chili. I must say that a carb laden bowl of soup hit the spot.

We both sat and ate and enjoyed the accommodations. The Cog Railway Train left and the VC cleared out. After we were done we wondered around the VC looking for souvenirs but found none. Finally we wondered outside to take the summit shot and then head down the mountain. 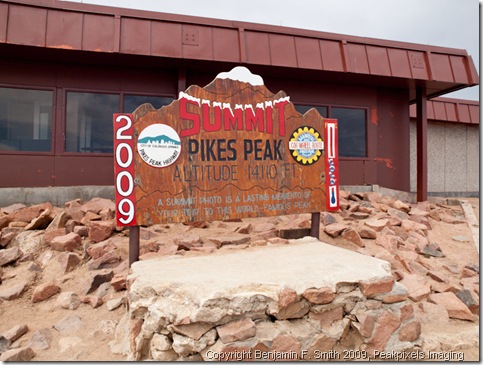 There Are Two of these Signs on the Summit, One in Front and Another in the Back. So if one of them has a line you can Just Try the Other Sign for that Memorable Summit Picture. 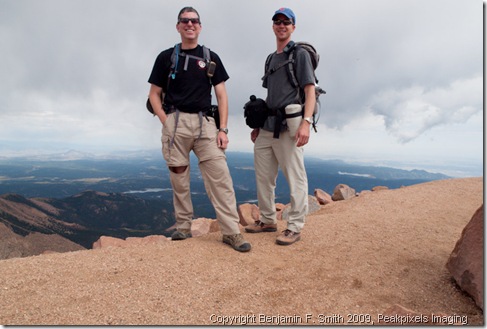 Rested and Well Fed. Now We Had to Get the Heck Off the Summit as Thunderstorms Drifted In

With the summit shot in the can, we noted that the weather had deteriorated rather quickly (as it so often does in the mountains) and we anxiously started to head past the Army Research Building and ultimately down the trail home.

Within a few minutes we heard the first peel of thunder. It was a ways off and appeared to come from an isolated cell south of the summit. I kept and eye on the cell and it was definitely moving away. However, the atmosphere was becoming less stable with the afternoon heating and we could tell there would be more storms.

At one point Don looked out and observed that the weather now looked like Wizard of Oz $#@&!. And it did. With the weather closing in we finally crossed the saddle and headed rapidly down towards to tree line.

It rained lightly and there was quite a bit of distant lightning and thunder. We dove down into tree line and relaxed a bit. At one point within tree line we were making relaxed conversation when there was a bright flash behind us and nearly instantaneous thunder. Both of us nearly browned out.

We decided to make double (or even triple) time and I did something I rarely do. I ran like a frightened school girl. I looked at my altimeter and noted that we were descending at 100 feet per minute.

To make a long story short we didn't get turned into carbon and actually that lighting bolt was the last close one we had that day. Don and I finished the hike and headed back to camp to pack up.

Over all with all the crazy stuff at the summit, Pikes is really a very interesting and scenic hike. Its no Wetterhorn, but it it has its own unique charms.

The GPS route below shows a total hiking distance of 13 miles and a bit over 4,000 feet of elevation gain. 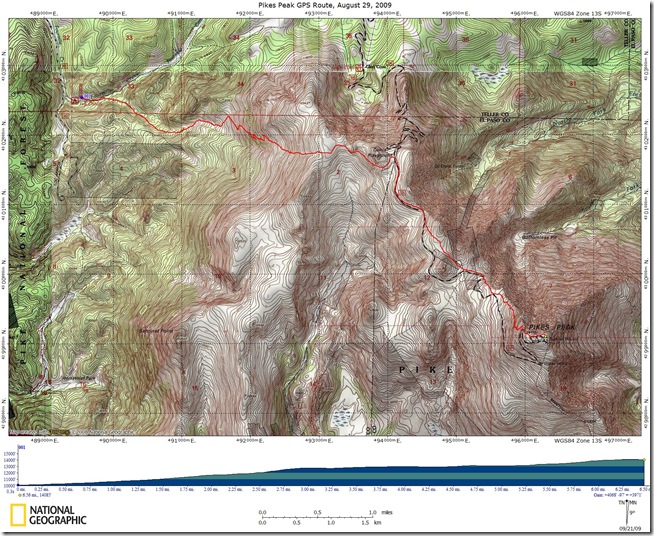 GPS route for Pikes Peak from the Crags Campground