Handies Peak – Another Jewel in the San Juan Mountains 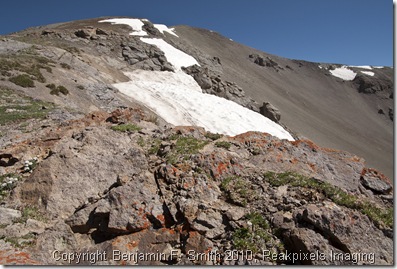 I need to get 3 more peaks to finish my 40 14ers before I am 50 years old (40×50). It looks like the last peaks will be Handies Peak (check). Conundrum Peak (a “soft” 14er but it counts in my book). Blanca Peak (sticks out of the otherwise flat San Louis valley). I turn 50 in February so I need to check these mountains off this season. Don and I got a late start last year not getting our first new 14er until late July. So we were determined to set out earlier this year.

We picked Handies for no other reason than it looked pretty easy (relatively) and we could get to it as soon as the trailhead melted out. The melting out happened pretty quickly as the late Spring temps had been warm. I had been checking the trailhead conditions on 14ers.com. It appeared that by Late June we were good to go.

Don and I left on Friday afternoon. I had just started a new job that week and already had to take off early my first Friday! Fortunately my new job at Qwest and my boss are excellent and the situation proved to not be an issue.

Don and I left the Denver area around 1ish and headed to Gunnison for dinner at our favorite pizza joint Pie-Zan's on 730 North Main Street. They make an excellent facsimile of New York style pizza. We have eaten there a lot over the years and it’s always good.

From Gunnison we made our way south through the bustling town of Lake City. Past the Slumgullion Slide and its associated beautiful Lake San Cristobal. I easily navigated the road to the America Basin trailhead in my 2004 Ford Escape. The road is really not that bad. I think a decent car could make it most of the way up the road except for a couple of shirt rough spots. High clearance is definitely a good idea but the road is not horrendous. 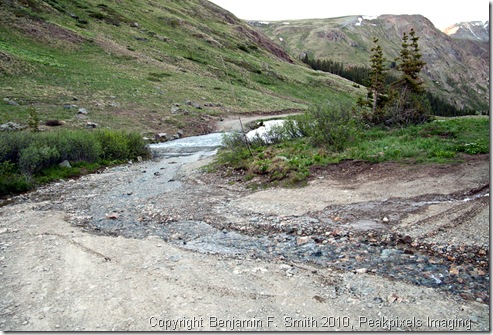 The Second Stream Crossing at 11,400 Feet

We drove all the way to the second, and larger, stream crossing. It was no problem to cross. We set up camp in a spot immediately after the crossing. We were about ¼ mile from the actual American Basin trailhead. The next morning as we hiked to the trailhead we saw that we could have made the short distance in the truck. But heck…It only added a little bit of walking to the hike. There were several streams washing down the surrounding peaks down improbably steep hillsides. American Basin is magnificent. It was still a little early for wildflowers. But, the green brush vegetation, colorful rock, streams, and patches of snow made for a visual treat. 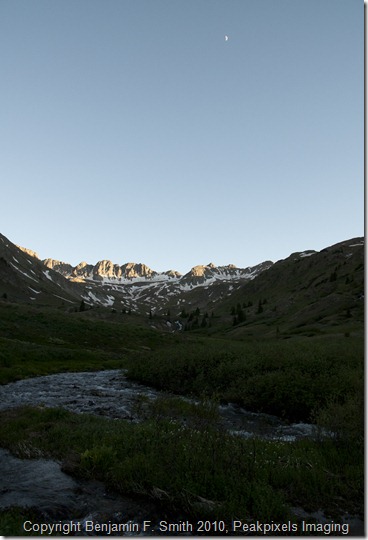 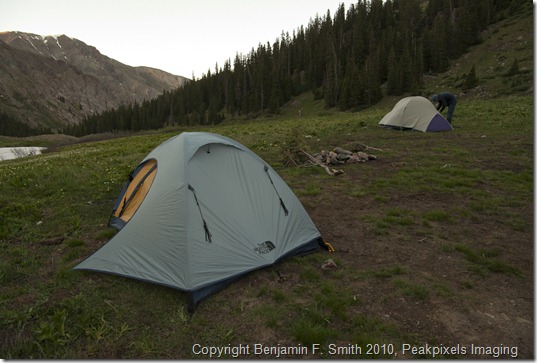 Our Campsite Just Above the Second Stream Crossing

We each set up our tents and organized gear. We talked strategy and decided on an early start even though the weather was forecast to be perfect. The earlier we started the earlier we would be done. And with a 6+ hour drive back home we would be able to get back before it was too late.

The alarm clocks (cell phone alarms actually) went off about 5 a.m. Don and I woke up and we choked down our familiar part tart breakfast. Don made coffee in his new (my old) Jetboil. We started hiking around 6:15 a.m.

We made our way up the road to the actual trailhead where we signed in at the register and started up the trail. It was not really that steep but I was really feeling tired. I didn’t really know why. I also didn’t know it at the time but Don was feeling the same way. It was a bit odd. I felt as if we were taking f-o-r-e-v-e-r to just get the first mile or so done. Actually, we were holding a very good pace exceeding 1,000 feet/hour. I am not sure why it felt so slow and tiring. It was just one of those days I suppose. 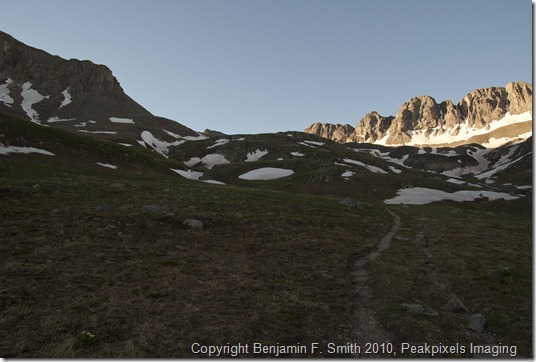 Sunrise in American Basin Above the Trailhead 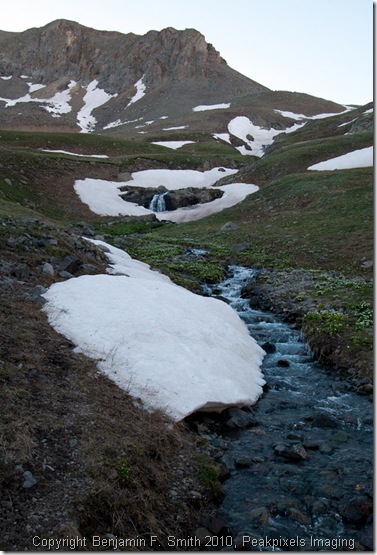 We had to do some route finding now and then as there was still some snow on and around the actual trail. Nothing too difficult. It was just hard to see where the trail went for short segments but we soldiered on in our discomfort. There was at this early hour quite a bit of ice on the trail. Some parts were rather wet from all the snow melt. With the nighttime temps below freezing there were many parts of the trail that were simply a sheet of ice which made for some careful navigation.

We finally reached Sloan Lake and from here to the summit we both felt much better and really started to enjoy this hike. 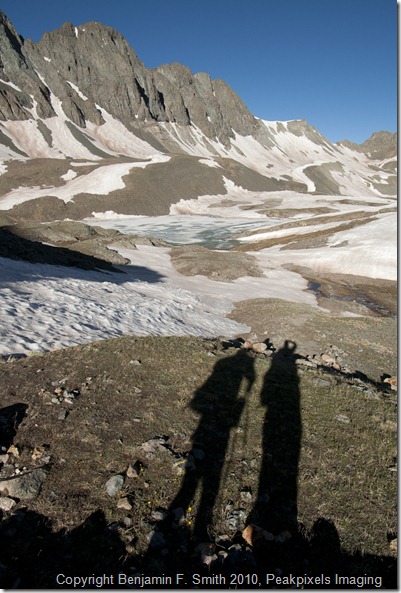 Long Shadows Cast by the Low Morning Sun. A Frozen Sloan Lake in Center of the Frame

The terrain around Sloan Lake is very chaotic (in a geologic sense) but interesting. It is dominated by piles of old rock rubble that has eroded off the surrounding peaks and tumbled into the basin. In the approximate middle of this jumble is Sloan Lake. Just magnificent! The trail has been recently rerouted to switchback up a hill just below the lake and then traverses, loosing some elevation, towards the longer and steeper ascent up to the summit. Looking up the remainder of the hike it appeared to grind up pretty steeply but it was not really bad at all and the scenery was astounding, as is common in the San Juans.

We started up towards the summit after a refueling stop and applying sun block. We really felt great now and the summit was within view and our reach. We climbed up to the top of the shoulder/ridge leading to Handies Summit. American Basin was stretched out beneath us in true glory. This statement is not hyperbole. It really is incredible. We were high enough now to really take in the vast San Juan views. The weather was pure blue sky. A slight breeze and a chill in the air. A basically perfect mountain hiking day. 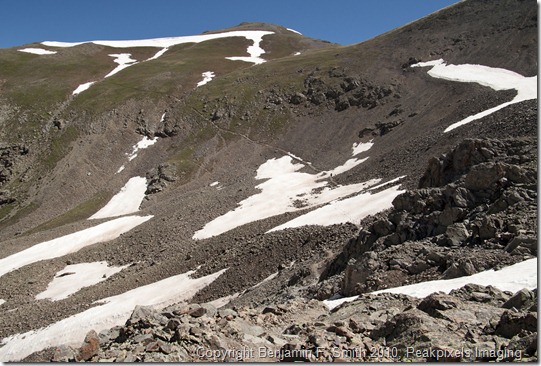 The Trail Stretches out Above Sloan Lake Heading for Handies Summit 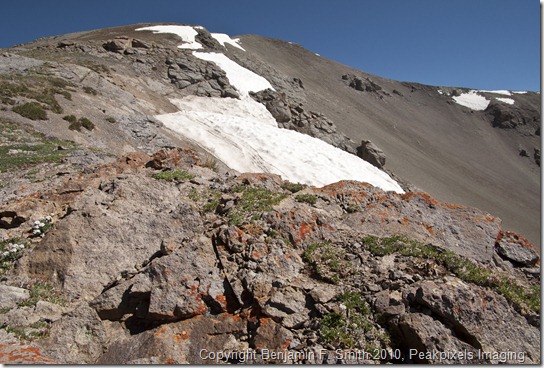 We continued climbing making great time. We were on the summit around 9:30 a.m. There were 2 other folks on the rather smallish summit. The views, the mountain, the companionships was great. One person on the summit was Matt Payne who is a 14ers.com regular and a nice guy. He was on the summit with his father. We talked about CO 14ers, hiking, and web sites. We took pictures and ate. Rested and relaxed. Matt and I both host mountain oriented web sites and both obviously have similar interested towards the outdoors. Me and Don and Matt, and Matt’s dad bantered on about hiking and such. It was a blast. I have rarely met anyone on a 14er (or 13er) summit that I didn’t like. Typically people are interesting, friendly, talkative, and helpful. We all share the same interests after all. 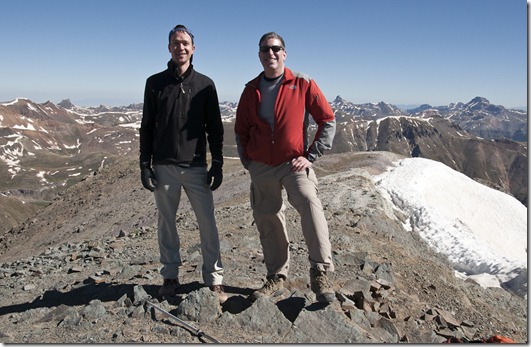 Don (left) and Me on the Handies Peak Summit 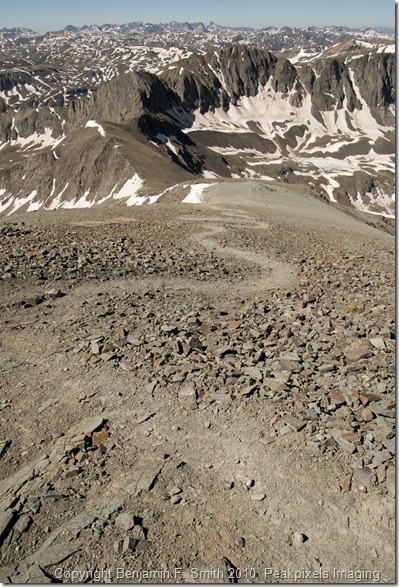 Looking Down the Trail From the Summit. Small Switchbacks, Green Rock, and Sloan Lake a Long Way Down in the Distance

Don and I finally decided it was time to head back down. Matt and his father headed off to Whitecross Mountain. We met a few other folks heading up. The weather was still perfect. It was great to have our first 14er complete in June and to have it be so incredibly scenic and in the midst of such great weather. 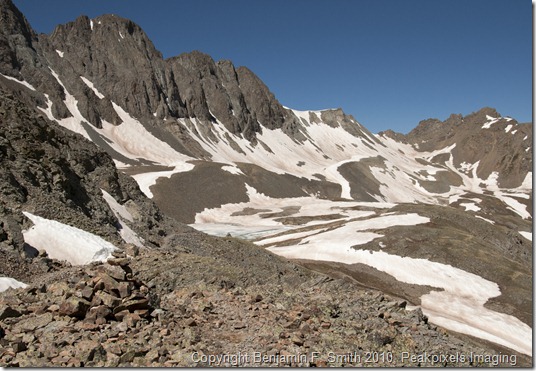 A Look Across American Basin on our Hike Back to Camp

We arrived back at camp around 12:30 p.m. We drove the long road back into Lake City and ate at the Tic Toc Dinner (no food finer). We had great burritos and somewhat odd service. Not bad service….just a little odd. Fitting for Lake City in a perfectly eccentric way. Then it was off for the long drive back to Denver. 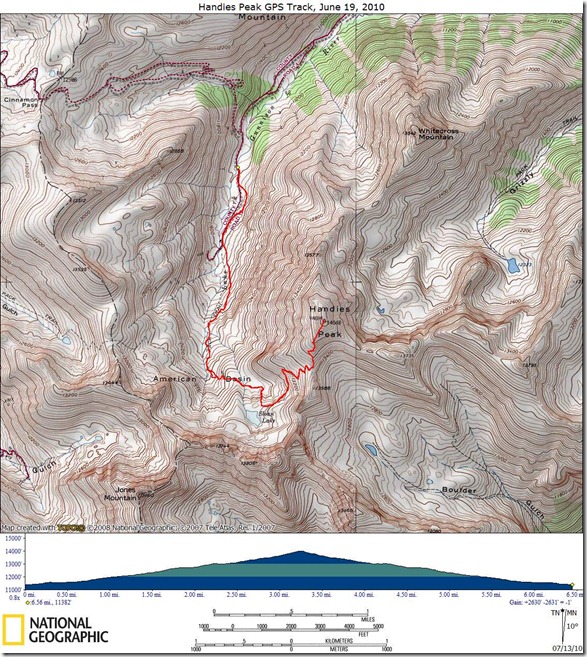 Next up…Castle and Conundrum Peaks