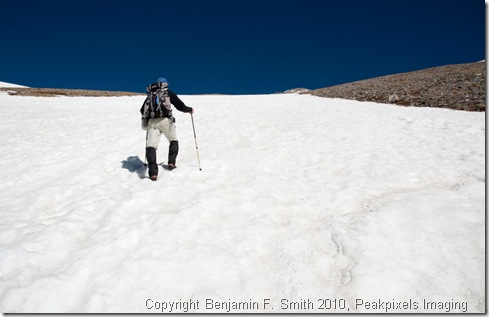 I have climbed Mt Shavano…3 times. Its not that Mt Shavano is bad, ugly, or unpleasant. It just has the unfortunate distinction of being located in the Sawatch mountain range. Home to some of the longest, steepest, hottest, and at times…distressingly monotonous peaks in Colorado.

The first time I climbed Shavano was August 2002. When me and a climbing partner arrived at the summit the weather was a little iffy and we looked over at Tabaguache and said, “naaaahhh.”

I next climbed Shavano in June 2006 with fellow Platinum Team member Mike O’Hearn. On that day Shavano and Tabaguache became my first double 14er summit hike. We had great weather and the climb was a blast.

So why would I climb Shavano again you might ask? Well, we usually kick off the climbing season with a warm up hike up, say, Bierstadt. This year however as Don and I looked over our portfolio of unclimbed mountains Don asked if we could climb something he had not yet climbed. As it was intended to be a warm up anyway, I thought, “what the heck.” and suggested Shavano with an option for Tabaguache.

I though that we would have a 50/50 chance at best to climb to Shavano’s summit given that it was still early in the season. It was still May. I thought there may be too much snow on the trail although I knew the road to the trailhead was open through trailhead reports.

So on Friday afternoon Don and I set off towards the Shavano trailhead. We arrived a little early. About 4ish I think. We set up camp and instead of sitting around and staring at each other Don and I decided to do some exploring.

From our exploring near the campsite and the drive in we could see that there was no snow in the lower areas. We could however see some snow fields higher up on the mountain and the Angel of Shavano was still well developed. 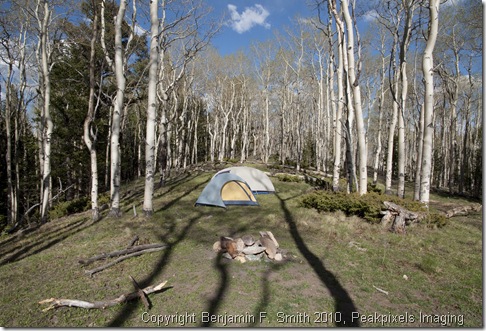 Our Campsite Conveniently Located at the Trailhead

It finally got late enough in the evening for us to eat our freeze-dried dinners. We discussed climbing strategy, organized our gear, and finally got tired enough to turn in.

The next morning we were on the trail by about 6AM. The weather was forecast to be perfect although a little breezy. 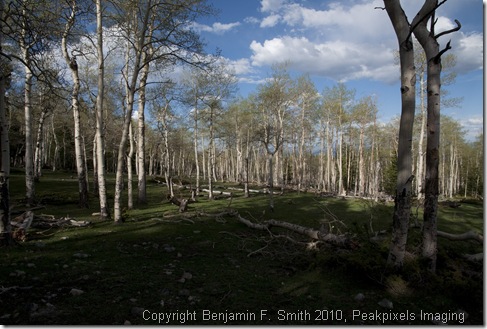 A Beautiful Aspen Stand Near The Trailhead

We arrived at the trail register and signed in. The reregister was torn to pieces and missing most of its bulk. People had been writing in their names wherever there was a scrap of room. The register had not been changed in months.

You Never Know Who You Might Meet on a Hike. Look at the Name In the Upper Right - B. Midddlebrook. Webmaster of the 14ers.com Site

As we hiked higher there were more frequent and larger snow fields. None of these required snow shoes but gaitors, which we had on, were well advised. We plodded our way along the trail crossing the occasional snow fields and finally made it to the long traverse that leads you to the saddle South of the summit. 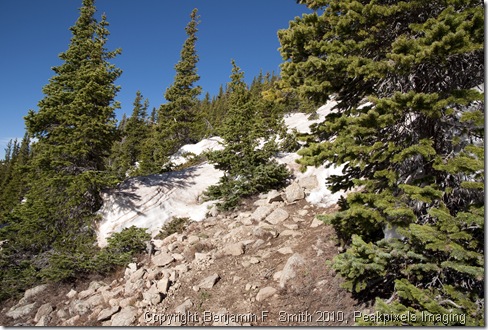 Near Tree Line and Some of the First Snow Patches We Encountered Around 12,000 feet

At this point Don and I elected to climb up the Angels “head” at the summit base (around 13,200 feet) and climb directly up the South face. 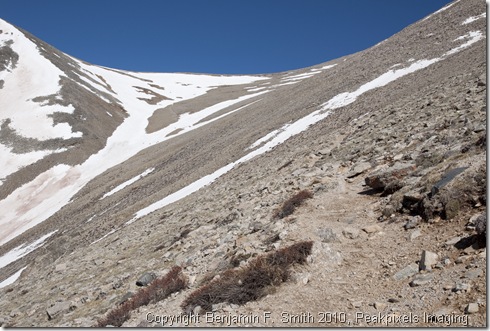 As Don and I arrived at the Angel’s “head” we turned North and headed directly to the summit grinding steeply upwards. 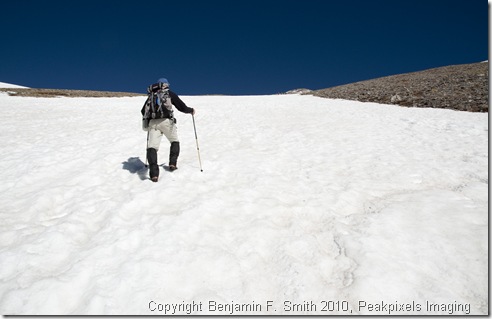 Don Climbs the Angel Directly Towards Shavano’s Summit, Which is Just Visible Over the Slope at Top Center

Two Climbers Make Their Way up the Steep Slope Towards the Summit. Snow Fields and the Green Pine Forest are Far Below.

After about 40 more minutes of steep climbing Don and I arrived at the snow covered summit. The weather was perfect with a strong chilly breeze blowing. 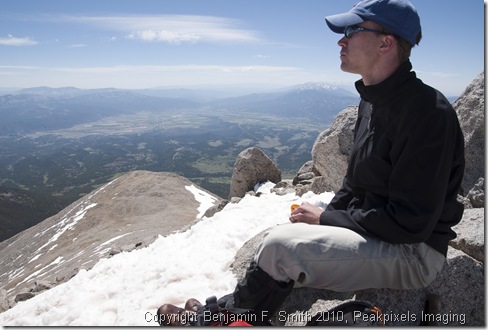 Don Takes In the Vast and Magnificent Views from the Summit

This was an extremely clear day. From Shavano we could see all the way down the San Luis Valley to Blanca Peak. It was really incredible. 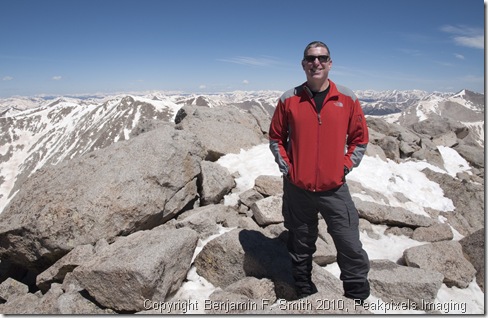 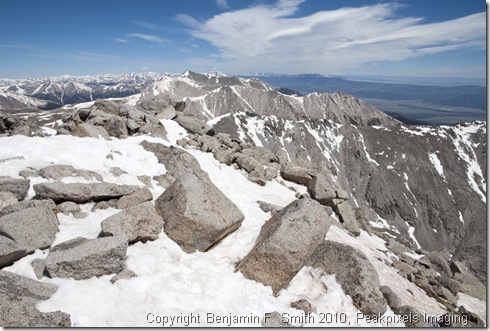 A Snowy But Beautiful Look Towards the North From the Summit

Don and I looked over to Tabaguache. Unfortunately, while the weather was great, the entire route between Shavano and Tabaguache was totally snowed in. I had very little motivation to head over to Tabby. By very little I mean nearly zero. Between that and the snowy conditions we bailed on Tabby to come back and bag another day. At least for Don.

The hike back to the trailhead was uneventful although it was unseasonable hot. It seems like no matter how dense the forest cover you are always roasting in the afternoon sun hiking back to the trailhead. We arrived back at camp around 2:30 p.m. We packed up camp and set off for the Coyote Cafe near Buna Vista for a celebratory burrito. It was a great start to the 2010 season. 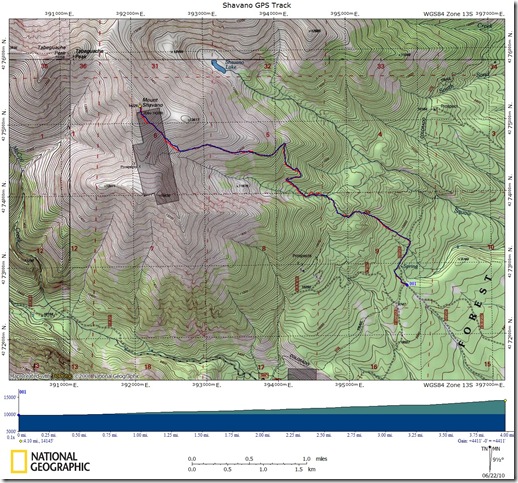 GPS Track for the Shavano Climb