Mt. Elbert, Solitude It’s Not. But It Is Thoroughly 14,433 Feet Wonderful 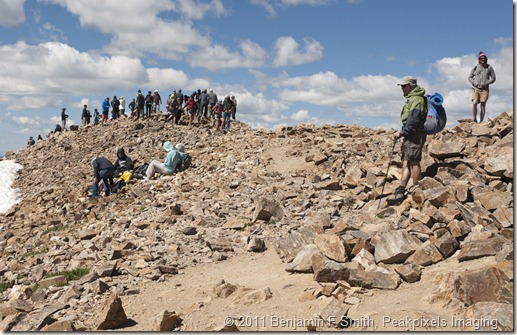 Finally! 14+ feet and its already August. Crazy! Crazy I tell you. Last year I made it to 14+ feet at the end of May. But last year there was not the snow on the summits that we had this year. There is STILL snow up there now. It seems fitting that I would climb the highest Colorado peak after waiting so long to get started.

Mt. Elbert, 14,433 feet. The king of the 14ers in Colorado. And just a few feet shy of the highest continental 14er, Mt. Whitney located in California. While Elbert is indeed the highest peak in Colorado, it is not exactly challenging…technically. It is, pretty much any route you try, a long hike with plenty of steep portions. But it is essentially a walk up.

We chose the South Mt. Elbert trail originating near Twin Lakes. It’s a great trail with the typical long, steep, hot, aspeny approach. Its about 4.5 miles from the trailhead to summit. But you traverse aspen forest, krumholz, alpine tundra and rock. All along the way there is much to look at. It’s a rather pleasant hike.

It’s a good thing too. Cause you are likely to be hiking with many, many “friends.” Laurence and I started this hike at around 6:15am from the trailhead and still had a bunch of company. Typically when starting a hike this early there are few people. But, as Elbert is “easy”, close to Denver, and the highest summit on CO, it does attract the crowds.

I originally climbed Mt. Elbert in August of 2003…eight years ago. Things have changed since then. There are now a LOT more people on the trail. I finished my 40 X 50 14ers last year, and the proceeding years, with more distant and less travelled peaks including, Handies, Blanca, Uncompahgre Peaks. These are not as crowded as the closer-to-Denver-easier-hikes-that-anyone-may-drive-to mountains.

But I am not saying the crowds are a bad thing…always. Sometimes you need that remoteness and solitude that a high peak can provide. And sometimes its fun to tear up a mountainside with tons of folks. For some reason I rarely meet someone I would classify as a wanker in the mountains. Usually they are interested in the same things as me. They cooperate on the trail. And are generally pleasant to be around in those regimes above 13,000 feet.

Laurence and I were going to climb Elbert the weekend before but the weather was locked into the monsoon flow and there appeared to be a very high chance of thunder and lightening on Elbert. So we postponed one week to much better weather.

I found a campsite at the unexpectedly nice Forest Service Whitestar Campground near Twin Lakes. We had a great walk-on site. It oddly had no bugs. We got a late start on Friday 5th. And then there was a bunch of traffic. We stopped at the Dam Brewery in Silverthorne for dinner. It was excellent. We finally arrived at the campsite at around 9pm. It was dark. We wondered around a bit till we found the site and then were pleasantly surprised by it large size, levelness, and general layout. It was really quite nice. We set up our tents. Then took some time to look into the dark starry night. We saw the light of several satellites and the Milky Way in beautiful clarity. Around 10pm we retired to our respective tents for a 4:45am wakeup call.

4:45am came pretty damn early. Laurence and I roused ourselves, ate, organized gear, etc. We climbed into Laurence’s Forerunner and headed off for the trailhead just a couple of miles North past the Twin Lakes Campground arriving around 6am. After last minute preparations we were “boots-on-trail” around 6:15.

The hike starts out through some pretty dense foliage crossing a creek and finally climbing into a thick and beautiful aspen forest as it climbs steeply uphill. 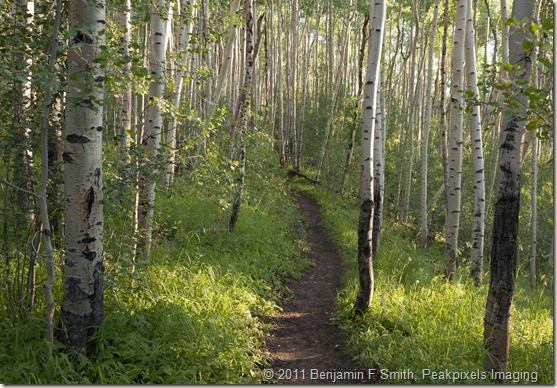 There are, as is typical of the Sawatch range, some pretty steep portions within the first mile or so of the hike. As you gain altitude you are afforded a beautiful view of Twin Lakes now increasingly below you. 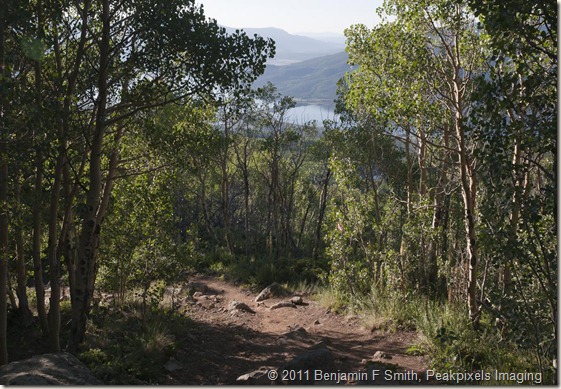 Finally the aspens begin to thin out and open up into alpine meadows near tree line. It feels good, for me at least, to get out of the trees. I much prefer hiking above tree line. I like the open rugged solitude of busted up rocks and high altitude alpine tundra. So it is with great anticipation that I welcomed the open meadows. 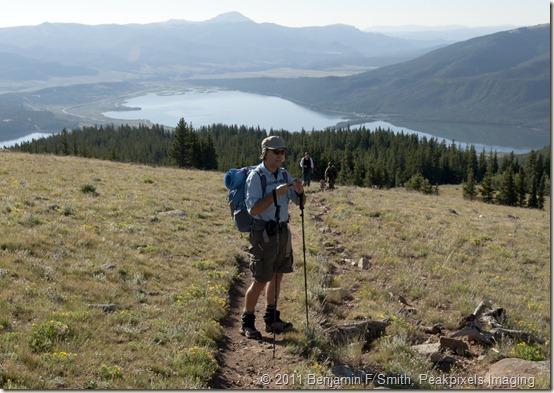 Laurence Stops just Above Tree Line for a Few Pictures. Twin Lakes in the Background

And finally the meadows transition to tundra. The trail in this potion of the hike has been widened and duplicated. At some points there are three or four distinct braided/parallel trails. But the way is clear and well travelled. 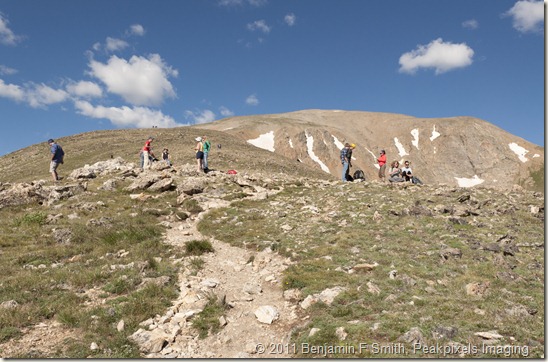 Well Into the Tundra at Around 13,000 Feet We were Never Far from the Crowds. Elbert’s Summit in the Background.

The climb above 13,000 feet relented somewhat. Its still a grind but nothing too steep. Great scenery comes into view and we both got a good look at the people coming up the “standard route” about a half mile to the North using the Half Moon trail. You will be thankful to be climbing via the South Elbert Trail when you see how steep that trail is.

The trail turns to the SW to West and contours gently around the the upper portions of the peak just above 13,700 feet. At 14,100 feet the trail finally turns for its final summit pitch. At this point the climber STILL has over 340 feet vertical to ascend. 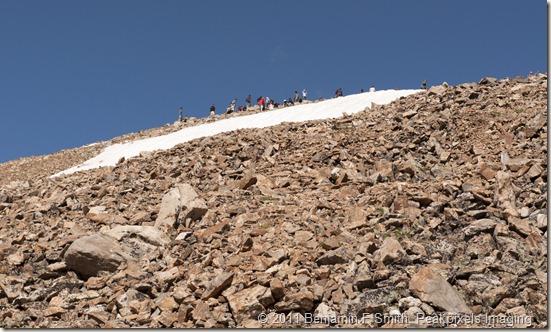 At this point, Laurence and I slogged through the last switchbacks up the trail to the whooping and hollering crowds at the summit. The weather was great. It was warm and just a little breezy. Immediately below the summit I saw the precise point where the Half Moon Trail and the South Elbert Trail join, at right angles. I just found it amusing and interesting to stand on that spot. Maybe it was hypoxia. I don’t know. It seemed cool at the time that these trails that start miles apart and thousands of feet below finally meet just feet under Elbert’s summit. 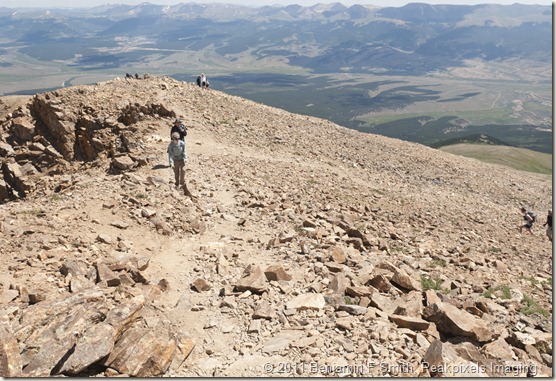 From the trail junction I turned for the last few feet to Elbert’s crowded summit. I could literally hear several conversations and people whooping in celebration at arriving upon the highest point in Colorado and indeed the second highest point in the Continual US. Mt. Whitney in California is about 72 feet higher. But heck, Whitney is in Cali. 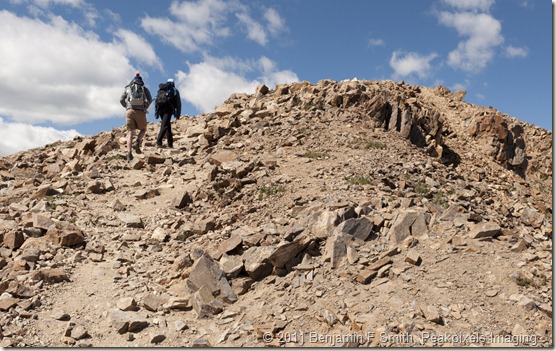 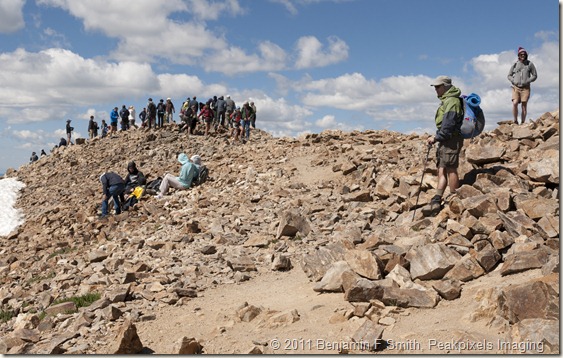 I walked up the last few feet in total exhilaration at FINALLY reaching 14,000! Indeed 14,433 feet! It was August 6 and here I was finally tottering around on a 14er summit this late in the year. What the Hell!? It felt great! Laurence and I had had a great climb. Excellent conversation. Incredible views and meeting many MANY friendly folks along the way. The weather was perfect with just some fair weather cumulous drifting by above. Not even that far above. 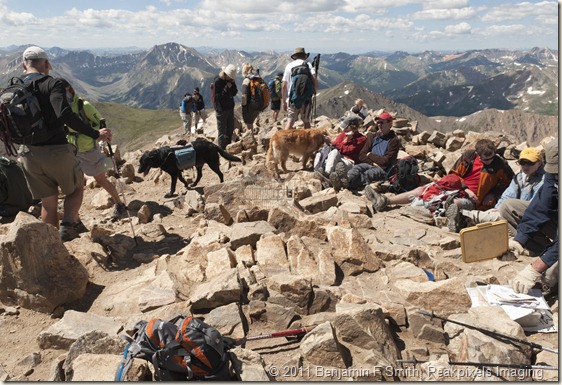 A Bunch of People on the Summit. There were More Dogs on Elbert’s Summit than I Usually see People on Other 14er Summits. 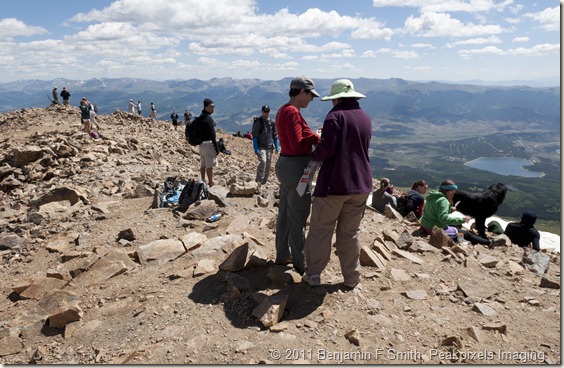 Another Look (NE) at the Summit Crowds. Two Ladies We Met on the Summit (Julie left in red, Jodie right in purple)

Laurence and I talked with lots (LOTS) of folks on the summit. It seemed we were in the prime photo spot as group after group asked if we could snap their summit picture…Which we did, happily.

One pair of folks who we met was Jodie and Julie shown above. Very nice ladies from Grand Junction who we ended up talking with on the summit. Elbert was Jodie’s first 14er and Julie’s 4th.

I (and I am guessing most 14er climbers) typically poo poo crowded hikes. But Elbert is different. I guess because we expected that it would be crowded. Well…maybe not this crowded. But anyway, it was absolutely fun. Everyone was joyful, almost manic as is often the case in the thin air of 14,000+ feet. But as Jodie said, “it was fun to be a part of the energy of the crowd.” I completely agree. 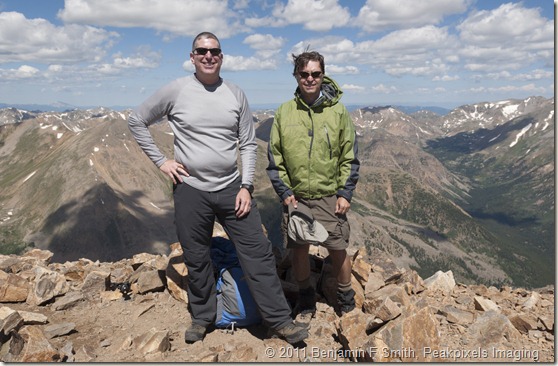 The trip back down was uneventful. We followed our ascent route and passed a lots of people still coming up. The hike, as hikes often do, dragged on and on…and on. This was a nine mile round trip. While not super long, it is not trivial, especially if you factor in the 4,000 foot ascent. And it was a rather hot day.

We arrived back at the trailhead around 2:30pm. Not a bad time considering the 6:15 start and the time spent on top. Laurence and I drove back to the Whitestar Campground from the trailhead where we struck camp and then headed off to the Golden Burro in Leadville to fill our pie holes with a burrito. The Golden Burro has been hit or miss in the past. But on this day it was a definite hit!

The service was excellent and the food fantastic. And the waitresses were all dressed in period clothing (which was oddly alluring) because we were coincidentally in Leadville during “Leadville Boom Days.” See http://www.leadvilleboomdays.com/ for more info.

Elbert was a great climb and Laurence a great climbing partner. Along with the “cast-of-thousands” this late (in my season) 14er hike was a success!

If you enjoyed reading this trip report, and honestly, how could you not, please have a look at my recently published book, “a common experience.” You can find information here: http://4000meters.blogspot.com/2011/03/please-have-look-at-my-recently.html. 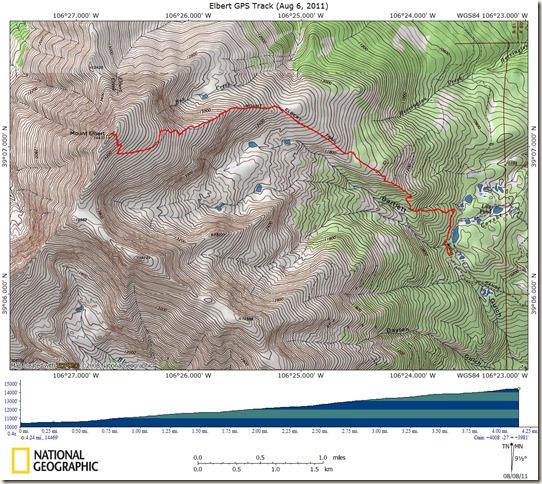 GPS Route of the Elbert Climb