Mt. Antero, The Reward is at End of the Road 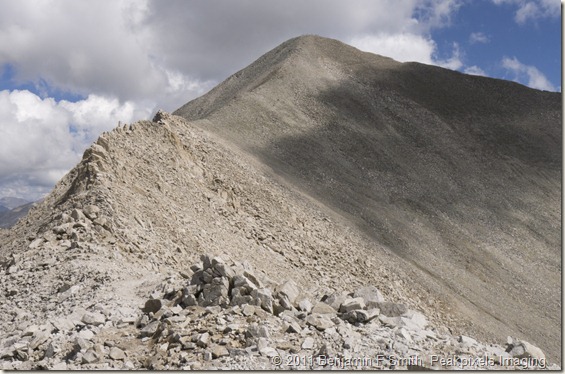 That was the last time that Don, my usual hiking partner, and I last ascended a 14er together. This year he and his wife celebrated the birth of the their daughter right in the middle of climbing season. I mean really?! Who has babies during climbing season?

In any case, things had settled down enough for Don and family that Don’s wife graciously granted Don a weekend pass to climb. We had planned a few earlier dates but there was either too much snow or just bad weather. August 27 was to be the lucky day!

Don and I left the Denver area on Friday afternoon. By the time we got to South Park the clouds had started to fill in and it was sprinkling. When we got to Buena Vista (BV) it was raining and as we drove deeper and higher into the mountains towards Antero’s high trailhead it was pouring and looked pretty menacing. It appeared, at least then, that we may just have a night out camping in the rain and breakfast somewhere in BV the next day.

The local forecast called for 40% chance of thunderstorms for several days so we figured we would give Antero a shot if we got a good weather window. With the rain at campsite arrival however it appeared that the only climbing we would do would be back into the Jeep in the morning to head back down to town.

We arrived at the camping area at around 5:30pm near 10,850 feet just beyond the first stream crossing. We found a great spot and set up. We had enough tree cover that we could remain relatively dry. We set up our tents and rehydrated our “food.” Chili Mac with MEAT! and Beef Spew. Honestly they were pretty good. Well…they were good for freeze-dried at least. 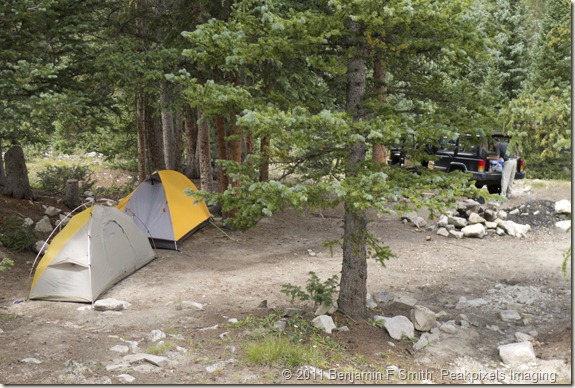 Camp at 10,850 feet. This Shot was Taken After the Climb…That’s Why it isn't Raining.

Later in the evening the rain relented a bit and were were treated to one of the most intense sunset alpenglows we had ever seen. It was magnificent and Don was feeling pretty chipper to be back in the mountains after such a long absence. A Preposterously Intense Sunset as Seen from our Campsite

Don and I agreed on a 4:30am wake up in order to get up and down Antero, hopefully, within a good weather window. We would wake up and see if it was raining at 4:30am. If so we would go back to sleep and try again in an hour.

As it turns out, it was not raining. When we popped out of our tents the sky was completely clear and the Milky Way and attendant stars were painted across the sky quite remarkably. We in fact did remark on its magnificence! The climb looked like a go.

We both attended to our morning duties and were ready to hike by around 5:30ish. We began hiking up the mining road and swiftly crossed the second stream crossing, at which point I realized I had left my hat back on the headrest (to dry) of the passenger’s seat in Don’s Jeep. So I dumped my pack and went back to camp then meeting again above the stream crossing about 15 minutes later.

Again we started off up the mining road. Below tree line it was so humid that my glasses were constantly fogged up. No breeze. Warmish temps. Plenty of humidity. It was rather frustrating. As soon as we ascended above tree line there was a slight breeze and there air seemed to dry out a bit. It was MUCH more comfortable. 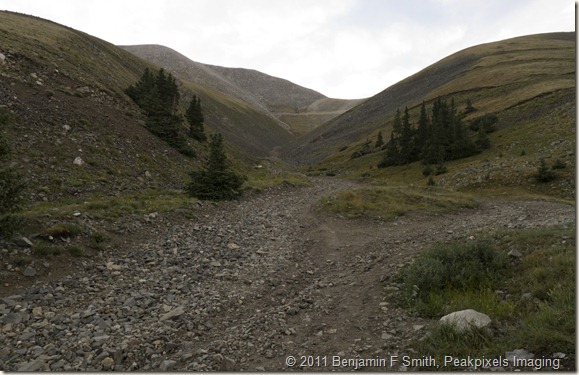 Walking on the road was not too bad. Roads can be, for those who have done this, a pretty crappy way to climb a 14er. They are not typically scenic. They can be uneven and rutted out, and rocky. As far as roads go however, the road up Antero is rather pleasant. It’s in good shape and it actually gets better as you ascend.

Point 13,870 Glows Against the Dark Foreground

The road seemingly winds back and forth and back and forth…for miles up towards Antero. Actually, seemingly is not the correct word. It really does wind around for miles as it ascends. Don and I were able to make great time on this part of the hike cruising up the road in what seemed like an improbably short time. The gloom and fogginess of early morning gave way to giddy cheerfulness. The weather was good but there were high altitude clouds beginning to blow in around the area providing a subtle warning that we had a specific time window in which to climb this thing.

We made our way up through 13,000 feet as the road takes a long loop around the South West shoulder of Antero. At 13,000 feet there is coincidentally a cairn built next to the road. As there were no other cairns to this point I can only guess that a thoughtful person built this cairn as a milestone for that altitude.

As we made our way around the loop we came upon a Forest Service informational sign. It describes many things including the Native American Chief Antero, wildflowers and gems which, can be found on or around these mountain. 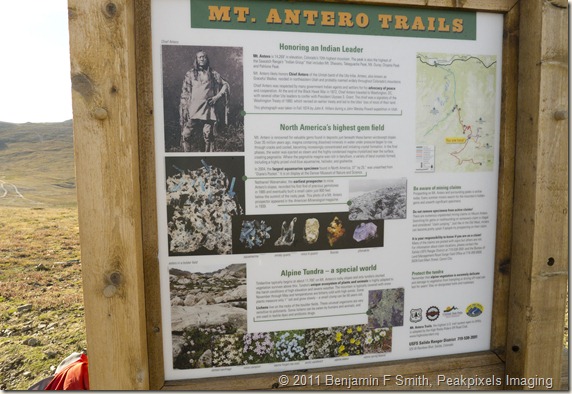 Forest Service Sign on the Big Loop at 13,100 Feet 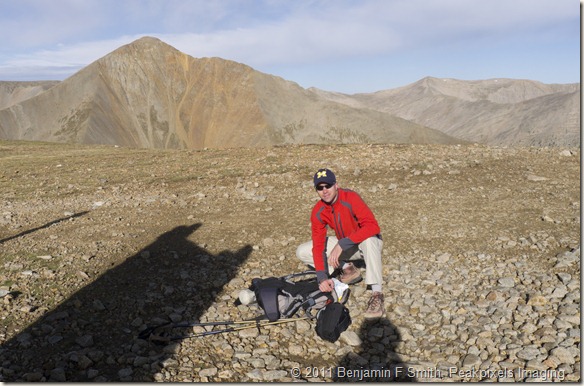 Don Rifles Through His Pack With A Colorful Point 13,870 in the Background

We stopped here for a break and for food. The remainder of the climb from here would be more steep. The weather still looked good although it was very slowly building by now into fair weather cumulous.

At about 13,200 feet the road turns a little nastier and steeper. It was at this point that we met two friendly girls who had left the Denver area at the insane hour of 2am in order to make the drive…all the way to 13,200 feet! We stopped and chatted as we smeared ourselves with sunblock. Our own selves…not each other. 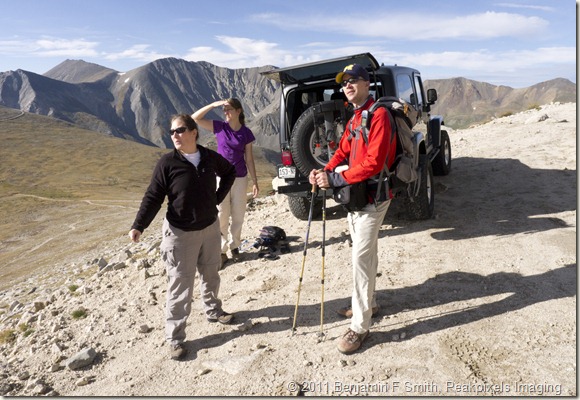 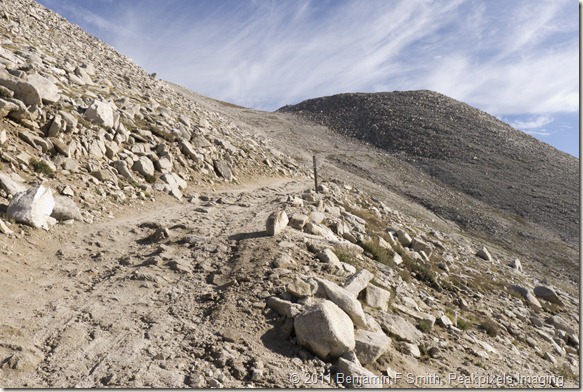 At this Point the “Road” Switchbacks Up Between the Two Points and Drops You at the Narrow Ridge Leading to Antero. The Brown Marker Center Frame is the Forest Service Route Maker – Route 278A

From here the road is much steeper, rockier, and narrow. It is still not too bad for the hiker but it sure slowed me down. Its really not all that bad. I am just not as fit as I would like and also I am carrying an extra 25lbs of unneeded bodily mass. It was also pretty hot. 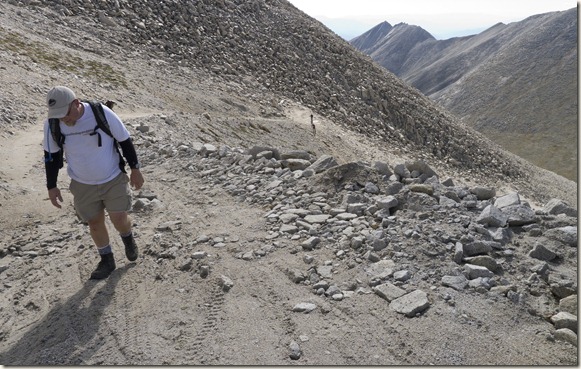 At the top of the switchbacks we were thankfully delivered to the near-end of the ridge to Antero. The ridge may look a little imposing but it is never more than an easy Class 2 hike. There are a few portions where you have to use your hands to haul yourself up narrow, but short, rock crevasses, but it is enjoyable in a mildly challenging way. 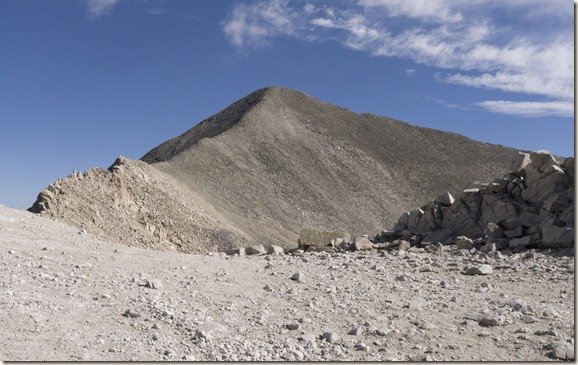 First Close Look at the Ridge with Antero In the Background. This is the End of the Road, Literally.

The road ends here and even has parking for several vehicles. This is as far as many people ever come. From here they spread out to various portions of the mountain hunting gems. Peak Baggers continue on towards Antero over a beautiful ridge liberally sprinkled with interesting spires and other rock formations. 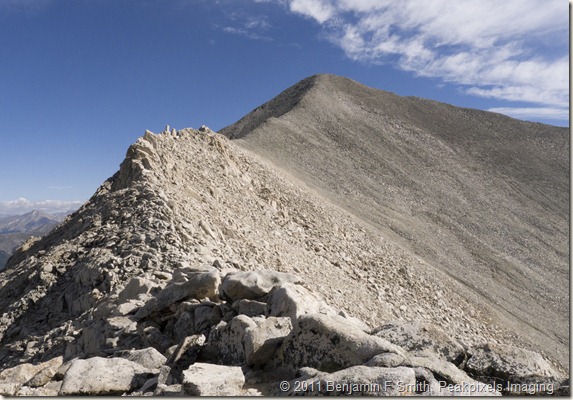 The High Point on the Ridge is Chemically Altered, Nearly White, Rock. It Contrasts Strongly to the Surrounding Geology. 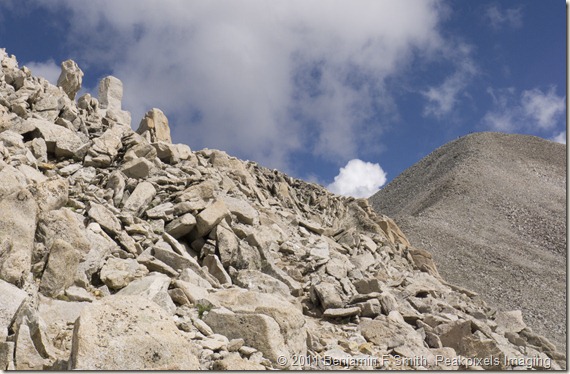 Three Equidistant Spires Along the Ridge. This Ridge is a Beautiful and Fun Scramble.

Don and I continued on to the ridge with Antero well in sight. The weather was holding and it certainly looked as though we would make this summit. Don was energetically, but carefully, cranking his way along the ridge. The entire ridge took perhaps 15 minutes or so to traverse.

From the ridge and most of the final pitch we could see happy successful climbers on Antero’s summit. I would not call this a crowded peak. In fact it was rather more deserted than I thought it would be with just the “normal” number of climbers on the route. After completing the ridge we were delivered to our final pitch at the base of Antero. There were two choices. One route zig-zags easily up Antero’s southern slope. The other route blasts directly up the southwest shoulder to the summit. 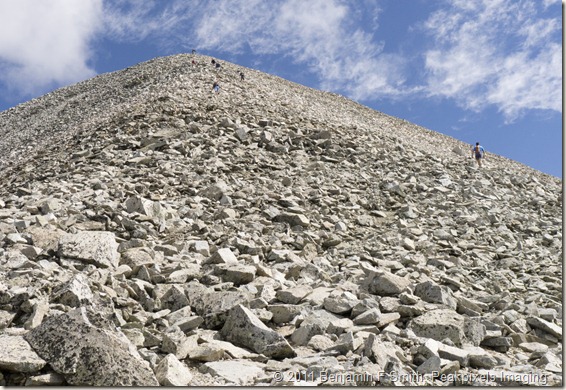 On the ascent Don and I elected to take the marginally longer but somewhat easier Southern route as I was feeling a bit winded. Don pulled ahead drawn by the urge to stand on his first 14er of 2011. I dawdled up the trail until I apparently took a wrong turn somewhere at a switchback. At this point I didn’t bother to find the actual route and I simply made a direct line up the last 100 vertical rocky feet to the summit. I arrived just a few minutes behind Don at around 10am. 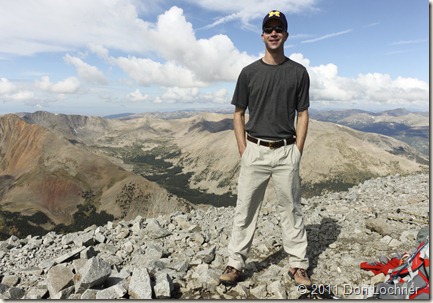 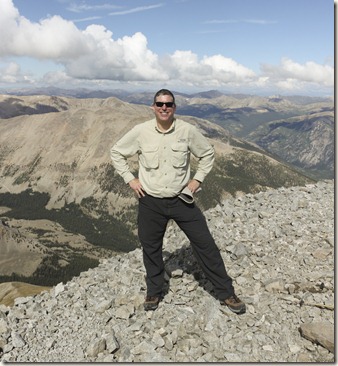 I relaxed on the smallish summit of Antero with Don and just one other person. Amazing. Just one other person to share this summit with. We watched as the cumulous clouds began to build into something just a bit more exciting than the fair weather clouds that had been with us most of the day. It didn’t look like bad weather was imminent but we still had the down climb to, and then along, the exposed ridge. We both agreed that we did not want to be on that ridge if something more sinister were to develop from the formerly friendlier clouds.

Don and I descended the direct route down to the ridge passing a few groups of folks and exchanging some friendly mountain chatter. We crossed the ridge and then headed down. At about 13,200 feet we were surprised to see a small weasel. It was skittering about in the rocks then ran across the mining road where I got a good look at the thing. It was not a pika. It definitely had a long slender body and small ears. Interesting…I had never seen a weasel before outside of a courtroom. We also saw three ptarmigan near this area during our ascent.

Don and I finally reached camp a little after 1pm after endlessly negotiating the long switchbacks, dodging ATVs and 4X4s. It was a hot day. And little if any breeze. The heat really zaps me on these hikes. It was a great hike and Don was quite happy (relieved) to have a new 14er under his belt. The clouds really started to build and there was even the rumble of thunder as were packing up camp .

We stopped at the Coyote Cantina (http://coyotecantina.com/) in Johnson Village (near Buena Vista) for one of the best burritos in the world and a beer, then the long drive home to the Denver area through the vast expanse of 285 and South Park. Another great hike and it was great to be back in the hills with Don.

If you liked this trip report and photographs please check out my book at: 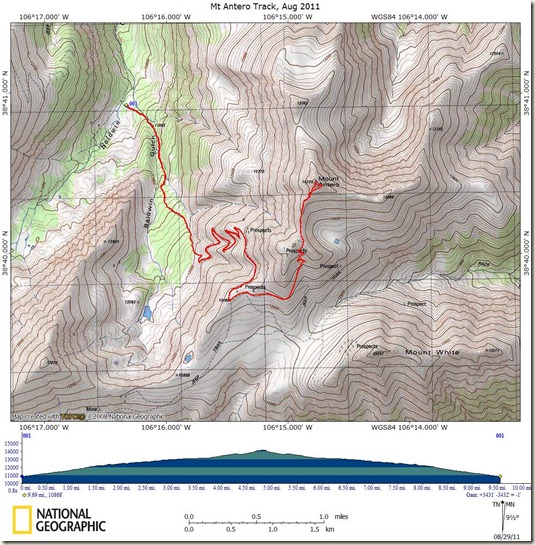