Boreas Mountain – Sometimes, Just A Little Dab Will Do Ya’ 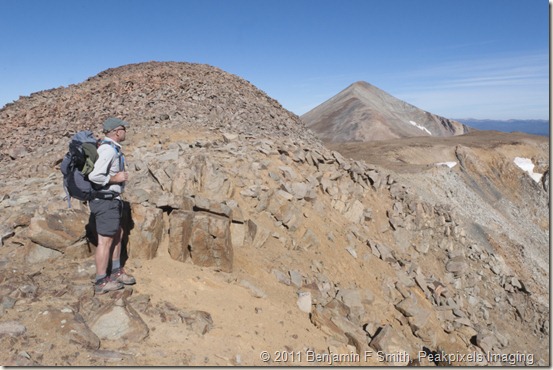 Late Summer, early Fall…The best time to hike and climb. The weather is more stable. The colors more intense. The shadows are longer, and the trails less crowded. It was with this late season character that I began searching for a peak to climb that might provide an easy, fun, and relaxing summit.

Sometimes you don't actually need a big mountain to get that big mountain climbing experience. Sometimes you are just looking to get out and up into the high peaks and not be so summit oriented. That's not to say one does not want to stand on a summit. But rather, that the journey to get there does not have to necessarily be “Everestian” in effort

Originally Mike O’Hearn (14er Platinum Team lifetime member) and I had planned on climbing Mt. Buckskin on the 24th. However, construction on the Kite Lake access road and associated closures made that goal unlikely. But Buckskin remains listed as a future climb. After looking for a while at other peaks I finally settled on Boreas Mountain located off the summit of Boreas Pass South of Breckenridge and right in the heart of some damn fine looking terrain.

Mike and I made final plans and I was able to rope a past WTS student (and partner on Elbert this season), Laurence Hoess to join us for Boreas. This was a fine group to hike with.

Boreas Mountain is by no means a long or particularly difficult hike. Our route ended up being a pinch over three miles (round trip) and 1,600 feet elevation gain. But, I was specifically looking for a relaxed “stroll” in the mountains and to just have a fun time without all that bothersome challenge, rushing around, alpine start, and wading through tons of people with the same goal as you. We accomplished our goals well.

Boreas Mountain is a beautiful peak with alpine tundra at the trailhead and rugged rocky talus near the top providing a fun, scenic, and that “all mountain” experience all delivered through easy logistics and a celebratory meal in Breck.

Mike and I met at the CMC in Golden around 2:30pm on Friday and drove down 285 in perfect weather. We were headed to the Forest Service Selkirk campground. This campground is located close to Boreas Pass road below the summit of the pass. It is perhaps a 10 minute drive from the campground up to the pass.

We wanted to get to the campground relatively early to maximize our chances of getting a site. I was worried that the campground would fill up fast with the Fall colors and Boreas Pass being a popular viewing spot. But I was wrong. The campground never did fill up. It was perhaps at 60 percent full even by Saturday afternoon.

Selkirk comes highly recommended from me. It’s a naturally scenic place thick with healthy pines and wonderfully large and flat sites. The site had been previously “groomed” as we could see rake marks where the camp host had apparently made the site as homey as possible before our arrival. $10 bucks a night per site and it has a clean pit crapper as well. What else does one need? A swim-up bar would really top things off but… 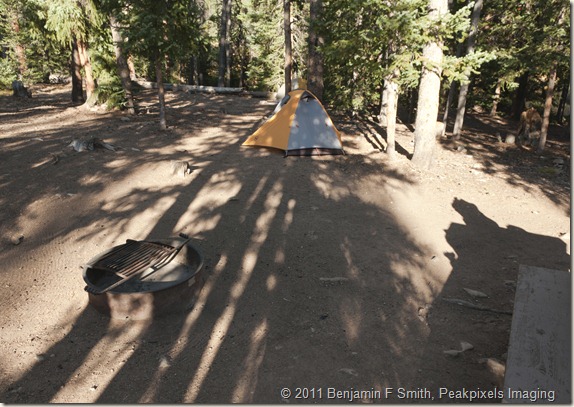 Our Site at the Selkirk Forest Service Campground. Scenic, Roomy, Flat, and Clean…Two Thumbs Up!

We arrived at Selkirk around 4:30pm. Mike and I scouted site 8 and found areas for each of our tents, unloaded the car, and generally relaxed shootin’ the shit and cracking jokes. Copious jokes. Mike knows lots of BIG words and he talks real good. We were also waiting for Laurence as he had to leave the Denver area later than Mike and I did. I had no idea when Laurence would arrive but I figured that it could be around 7ish.

I rehydrated my meal (teriyaki chicken) while Mike ate a gargantuan sandwich that he had trucked in from King Supers. We took a torque wrench to some beers and and sat back. After eating we felt like taking a walk around the campground. We walked around the short campground loop road and then out onto route 801. It was there that we happened upon Laurence wondering around looking for the campground. We directed him to site 8 and then studied the incredible view of Mount Silverheels.

Finally we were all present and in camp. The night was incredible. The Milky Way was obvious. We were able to pick out several transiting satellites. We also saw one of the brightest and longest lasting meteors I had ever witnessed. It fell North to South lasting about 1 to 2 seconds and had bluish-green colors. It could possibly have been, or related to, the NASA satellite that took the plunge about that time but I am not sure. Whatever it was, it was quite impressive and most assuredly gone now. We were also able to just make out the Andromeda galaxy. Impressive indeed.

The forecast called for severe clear for several days into the future. Because this was to be a “therapeutic relaxation” hike we decided not to wake until 6:30am. Much later than the usual 4:30am wakeup call. Heck…6:30 was down right sleeping in late!

We all awoke the next morning and readied for the hike in a sort of slow sloth-like manner. It was about 35 degrees and totally clear. This would be (and was) a great day. Mike who is usually more…uhhhh…”efficient” with his time before (and during, and after) a hike was oddly relaxed and really quite unmotivated to rush out to the trail head. Its all part of the new nearly-retired Mike. A more relaxed, unhurried, and just darn pleasant-to-be-around Mike.

We slowly arrived at the summit of Boreas Pass around 8ish I think. The entire Boreas Pass road is easily drivable by any sort of vehicle. We hopped out of Mike’s Honda CRV and geared up in the cold morning. 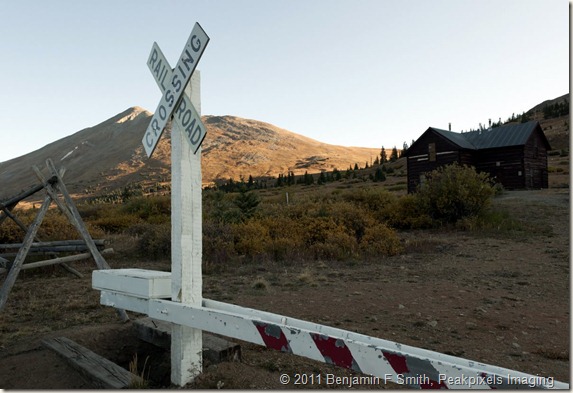 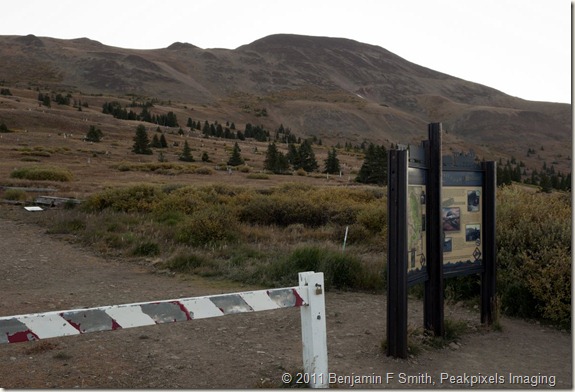 Boreas Mountain Rises About 1,600 Feet From the Pass Seen here in the Background Behind the Historical Plaque

The trip report from 13ers.com indicated “Leave the trailhead and walk past a building. Look for a small trail that heads east behind the building.” Well…we never did find the trail. I am sure its there. Pretty sure…I guess. In any case, anyone with a modicum of skill or talent related to outdoors route-finding could make their way to the summit of Boreas Mountain with or without a trail. 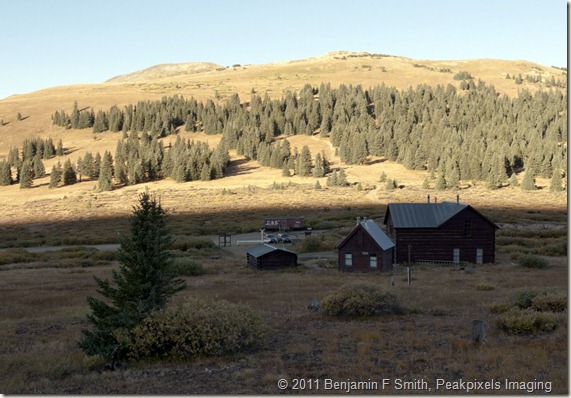 A Look Back to the Pass and its Buildings from just a Short Ways up the Slope Towards Boreas Mnt. I Don’t See Any Trail.

And so we did. It was straight forward to pick a line up the slope to the summit. The line that we did take was steeper and shorter than the alleged mythical trail. However, there is nothing difficult about taking a more direct line. Its just a bit steeper. 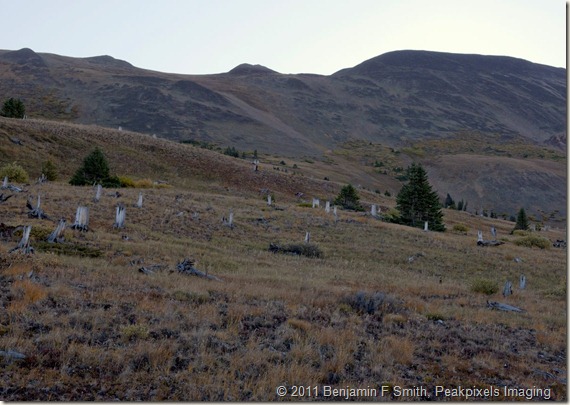 The three of us, Me, Mike, and Laurence started off, and up, across the mostly benign alpine tundra, which was studded with hundreds of tree stumps. The stumps had turned white-gray with age and made for a visually interesting landscape. This section of the climb eventually led to a steeper section of talus. 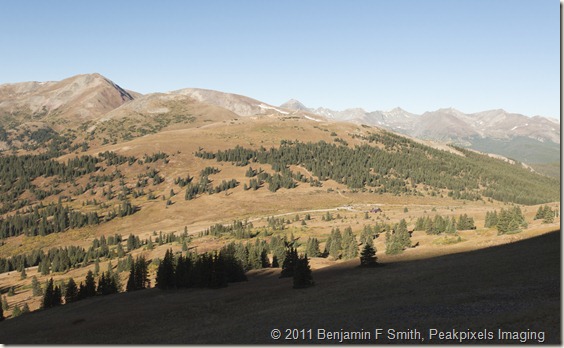 Boreas is Really a big jumble of Talus

Boreas Mountain, despite it demur appearance, is really a giant jumble of busted up talus-sized rock above the tundra. You will be climbing over rock piles all the way to the summit once you enter the talus section. You can, of course, find high alpine tundra here and there while ascending but the terrain is predominantly rocky. Its fun…It gives this mountain a much more rugged “mountainy” feel. 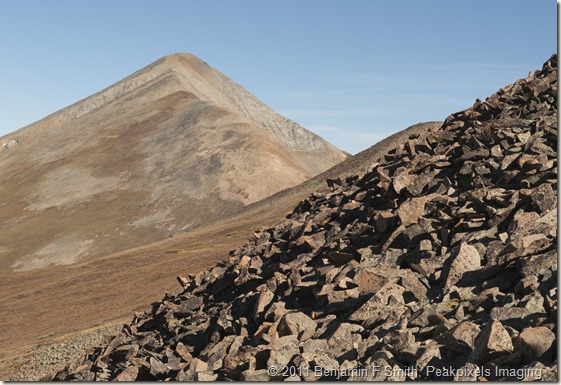 Looking Northwest to Bald Peak. The Talus you Encounter on this Hike is Apparent in Foreground

It was hard to get images of Boreas as we climbed because the sun was rising directly over the peak. In fact we saw several sunrises as the sun peaked over the summit. We would then climb a bit more and the sun would drop below the summit only to reappear as it caught up with us again. 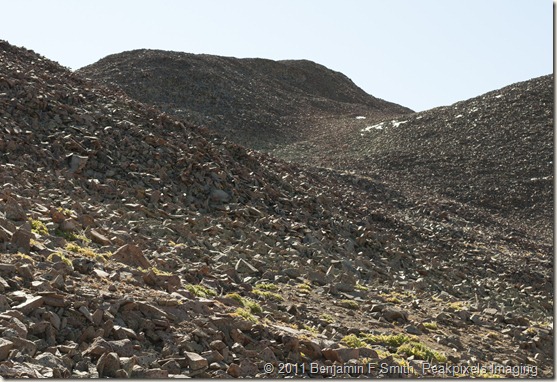 Finally we made the top of the ridge and we were afforded incredible views to the North and East. The day was Blue-bird. The steepest part of the climb was behind us. We simply had to follow the ridge to the triple summit of Boreas Mountain. 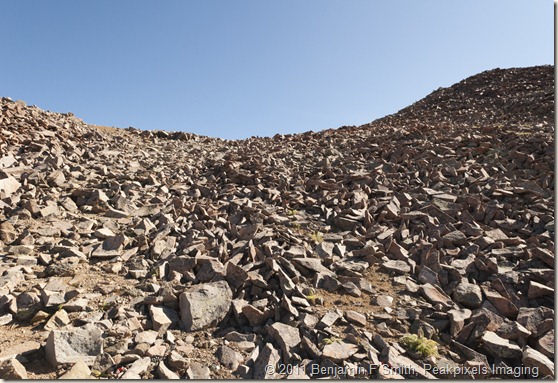 Approaching the Top of the Ridge. From Here We Followed the Ridge to the Right (South south east) 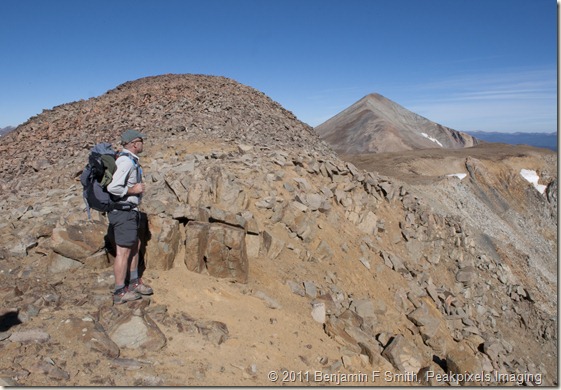 Taken Along the Rolling Ridge, Mike Takes in the Views to the North and East. Bald Mountain in the Background.

Gaining the Ridge and on to the triple summit

We were about 12,800 feet as we climbed to the top of the ridge. Boreas is “only” 13,082 feet so there are just a few hundred feet to make from the ridge. Following the ridge you will encounter a few minor false summits but they are rather short in stature and fail to inspire much anxiety or frustration. 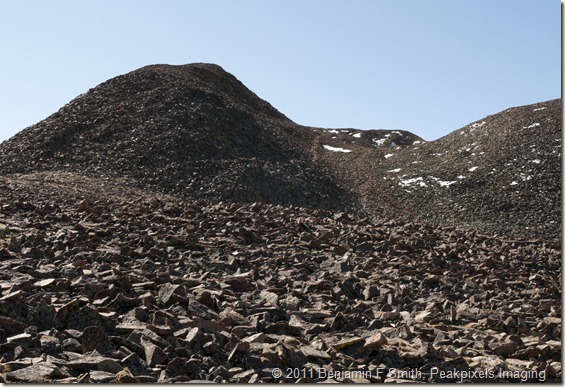 The Final Summit Hump Leading to the Rather Linear Summit Ridge(s) and the Highpoint That is Boreas Mountain’s Summit. The Trough is Located Between the Two Parallel Ridges. 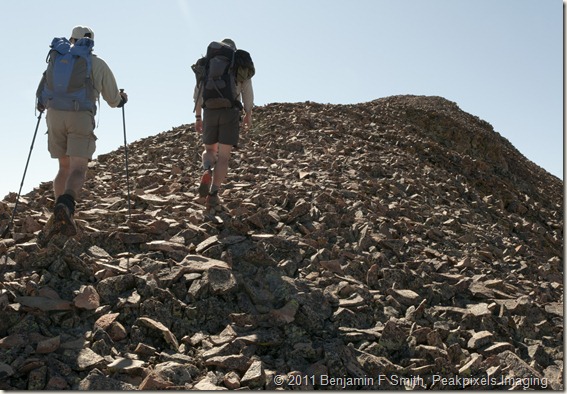 This is a bit of a strange peak. It is comprised of two parallel ridges that make up the summit with an odd wide and flattened trough separating the ridges. Whence you finally gain the summit ridge you are nearly there. There are two high points on the higher Eastern ridge. The second, slightly farther, high point is the actual summit and it houses the register within a small crescent rock shelter. 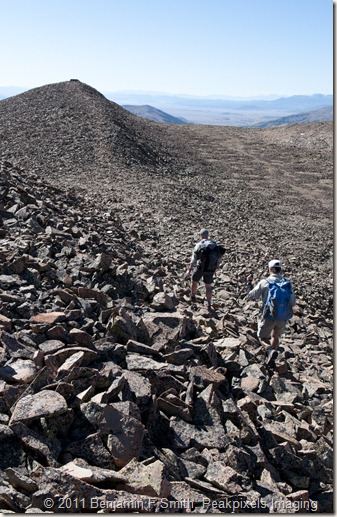 Its just a few minutes of easy hiking to the actual summit. And its quite scenic. The weird flattened trough is below and to your right. Vast views to the left. And the summit shelter at the top. There was no hurry to get there. It was a perfect day. Great company, and an incredible mountain with a ruggedness that belies its rather diminutive importance. We all reached the summit register and reveled in our scenic and relaxed success. 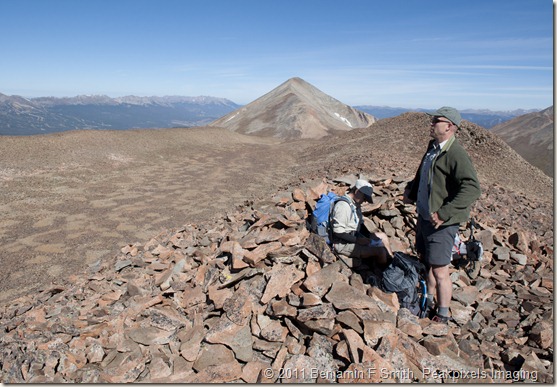 Mike (standing) and Laurence (sitting) Relax After We Made Boreas’s True Summit. Bald Mountain in the Distant Background. Bald Mike in the Foreground. 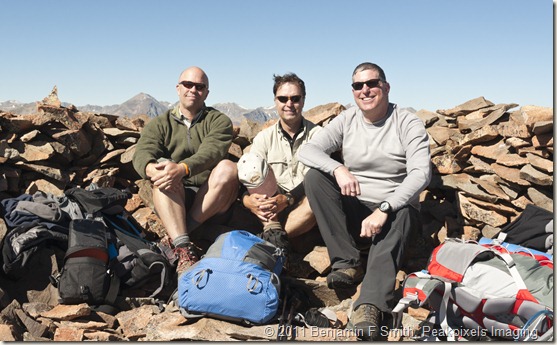 Summit Shot! Left to Right – Mike, Laurence, and Me

We all sat back and took in views, food, and hydration. It was about 11am. We had taken a good long while (2 – 3 hours?) to get to the top but we were all really happy. There was no hurry this day. Just enjoyment of the climb on a fine mountain accompanied by friends. The return route was was pretty much a direct descent in a nearly straight line from the ridge back to Boreas Pass, still hoping to find the elusive and stealthy “actual” trail. We never did find it. When we arrived back at the pass the parking area now full with cars and people seeking the fall colors.

Boreas is Highly Recommended. Its an easy climb. Its beautiful, and it is constructed such that it gives you the feel of a much longer tougher mountain. Do it before Boreas Pass closes.

If you liked this trip report. Or even if you didn’t, please have a look at my 14ers book, a common experience at: 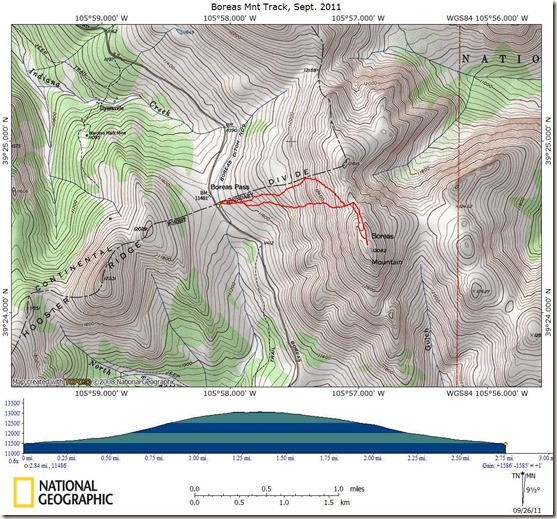 GPS Route for the Boreas Climb. The Northern Route Was the Ascent.